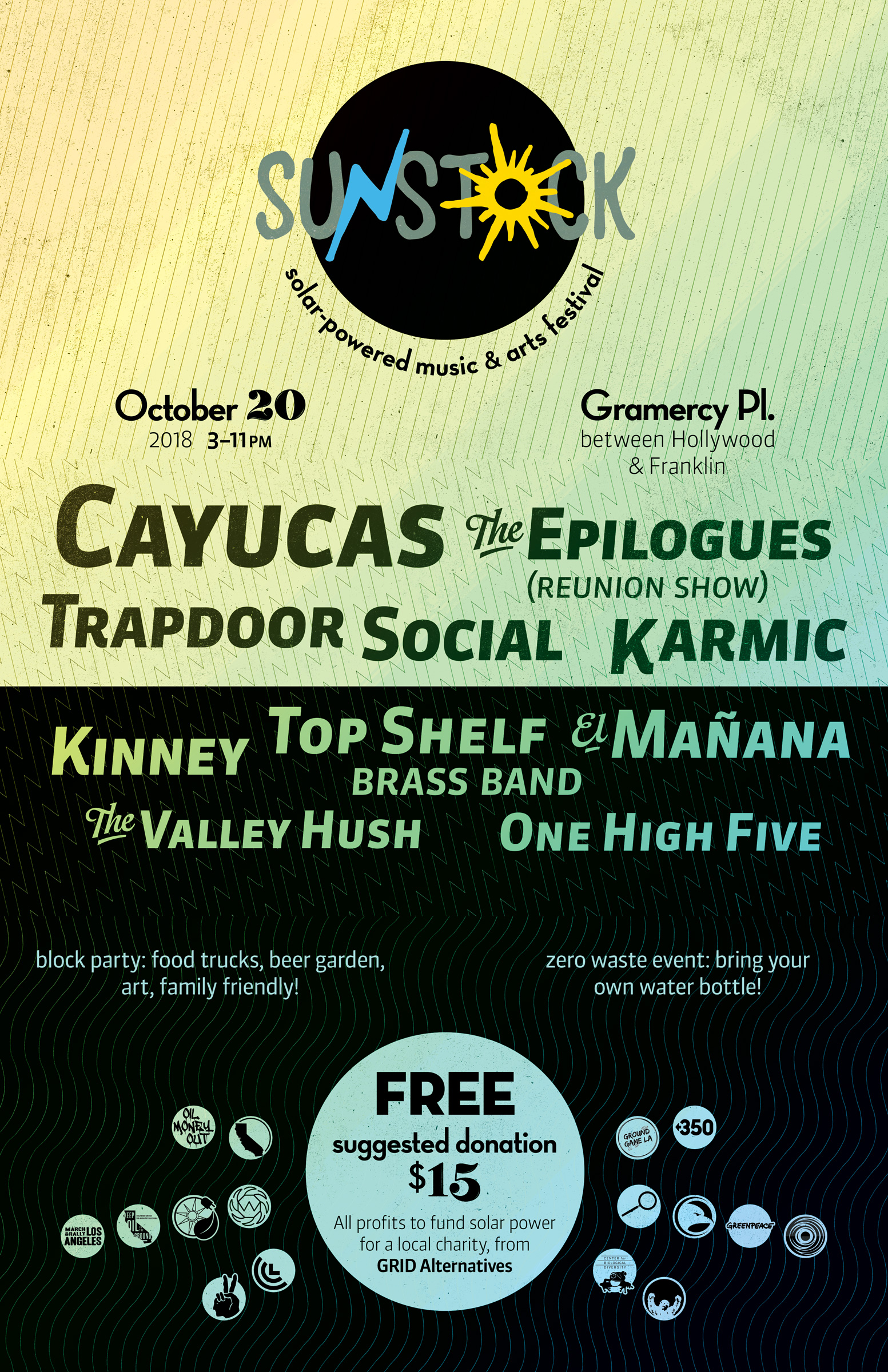 HOLLYWOOD, Calif., September 25, 2018 – @SunstockSolFest 2018 is less than one month away taking place for the 3rd year in Hollywood on September 20. Sunstock is voted by fans as “THE BEST of 2018” all-ages block party.

A Suggested donation is $15 with 100% of profits going to GRID Alternatives for a solar install on a deserving rooftop. Solar-Powered live music, food, beer, art, activities and local non-profits are all in the mix. Sunstock is the frequently talked about free for all-ages block party, completely open to the public and even doggie friendly. Sunstock aims to lead by example in the event world by using silent and non-polluting SOLAR GENERATORS. Follow all the artists and bands on social media for updates and news, and follow Sunstock too @SunstocksolFest #OurEnergy #Sunstock2018

Cayucas: Cayucas are back. After taking a few years break from touring to write, Cayucas has dropped a new single “Jessica WJ” off their upcoming third album. Their new album is produced by Dennis Herring (Modest Mouse, Counting Crows, etc.) and will be released in early 2019 by Park the Van Records. Cayucas hasn't stopped cranking out upbeat & dance-y summer jams and we're sure this record will continue that tradition. @cayucas https://www.cayucas.com

The Epilogues: The Epilogues are a commanding indie/synth/rock outfit hailing from Denver, Colorado. Combining pristine melodies, meaningful lyrics, and dynamic keyboards, the band delivers polished and danceworthy tunes that carry a kick. The passionate urgency with which they play each show leaves fans both elated and yearning for more. facebook.com/theepiloguesband

Trapdoor Social is excited to complete this third annual Sunstock, continuing to combine their music with activism as they've done through past fundraising projects with Homeboy Industries, Mesa Ridge High School, and Kids Cancer Connection. Trapdoor Social has been producing solar-powered concerts and festivals around the U.S. since 2015. The band is also very excited to be releasing new music this fall, followed by their second full-length album in early 2019. @trapdoorsocial www.TrapdoorSocial.com

Karmic: is an electronic pop band co-fronted by female singers Laura Baruch and Kylee Katch, backed by producers and multi-instrumentalists Sam Murphy and Peter Kastner. Their music pulls from a whirl of driving guitar and bass riffs to a cadence of bright melodic synths, all guided by 80's-influenced dance beats. Their music sends a powerful message highlighting life's treasures, risk-taking, and creating change to better society. @thisiskarmic https://www.thisiskarmic.com

Valley Hush: Formed in 2014 in Detroit, Valley Hush has built a reputation on creating music that swells with vulnerability and speaks to our shared and binding commonality that we're all in this strange, beautiful mess together. Their mélange of reality and fantasy transcends genres with cohesion and a purposeful gaze. @valleyhush www.valleyhush.com

One High Five: One High Five is the indie punk rock explosion from Long Beach, California fueled by singer/songwriter David Sauer's love of ear candy, loud noises and fun. They have self-released their first album, “Here, Hear,” a handful of singles and have been featured on various compilation discs, films and commercial spots. One High Five will be releasing their second album, “Beardlip,” this summer. http://onehighfive.com