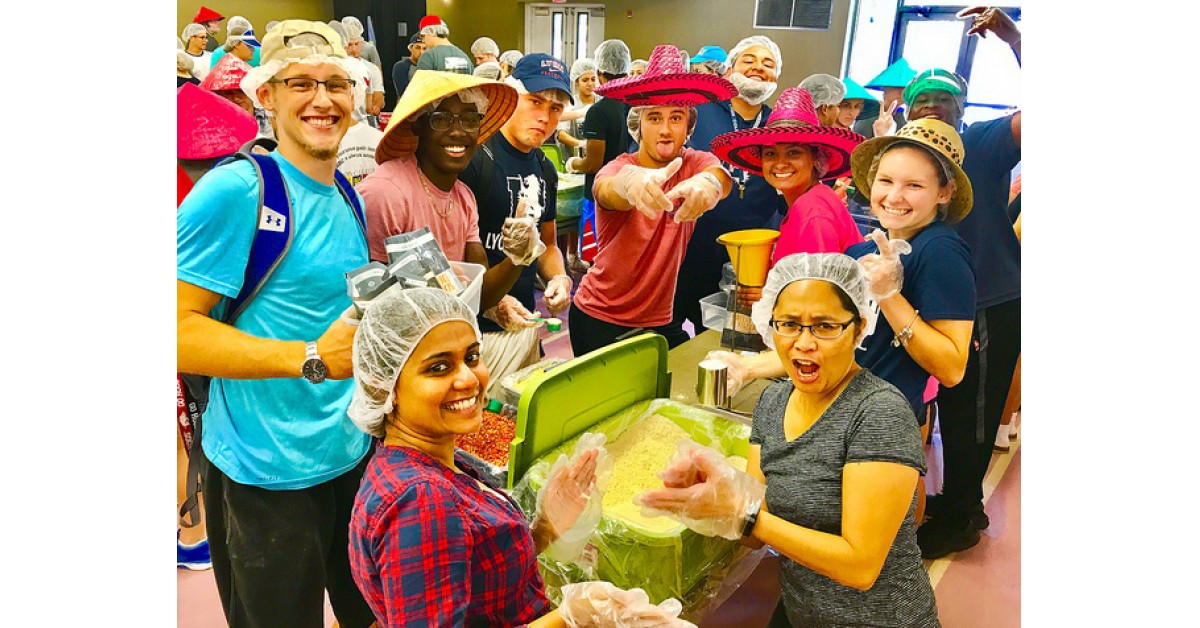 CAVE SPRINGS, Ark., July 8, 2019 – ​​​The Pack Shack, an Arkansas-based non-profit known for addressing food security through their signature crazy fun Feed the Funnel parties, has surpassed 30 million meals packed for people in need across the country since its inception in 2013.

Over the past several years, hundreds of companies, faith-based organizations, schools, universities, and families have hosted Feed the Funnel parties, including: Tyson Foods, Walmart, Arkansas Blue Cross Blue Shield, Owens Corning, AT&T, KPMG, University of Arkansas, and The Ohio State University. Meals packed at Feed the Funnel parties typically stay in the communities in which they are packed to serve local needs. In some cases, meals have been shipped to serve people affected by natural disasters, including hurricanes Harvey and Maria.

“We encourage people to #beneighborly. It starts by knowing your neighbors, understanding the struggles and challenges they’re facing, having compassion, and taking action. When we think and act as neighbors toward one another, we’re building healthy, resilient communities,” commented Bret Raymond, co-founder and CEO of The Pack Shack.

“Congratulations to the Pack Shack on reaching this significant milestone,” said Curtis Barnett, president and chief executive officer of Arkansas Blue Cross and Blue Shield. “Because of your commitment to fighting food insecurity, millions of people have benefited. Students have had better focus at school. Many people have slept better at night. And countless more have been healthier because of the nutritious meals provided through your organization. Arkansas Blue Cross is pleased to work alongside you to rally communities and feed the hungry.”

“Owens Corning has partnered with The Pack Shack for over a year to combat food insecurity,” noted Ann Malak, Community Relations Lead at Owens Corning in Toledo, OH. “We have engaged nearly 850 employees and packed just about 400,000 nutritious meals for our neighbors in need. The Pack Shack’s Feed the Funnel party has been a great addition to our on-site volunteer project offerings. Their team is amazing to work with and their turn key event makes giving back easy and fun. I highly recommend The Pack Shack to any organization who is searching for a fun, energetic team building event to engage their employees and make a difference in their communities.”

“At Tyson Foods, addressing hunger is a priority. We work diligently to get food to those in need and provide support the people who work tirelessly to end hunger every day,” remarked Pat Bourke, Corporate Social Responsibility Manager. “Since 2014, Tyson Foods has engaged with The Pack Shack across the country to provide hundreds of thousands of meals for people in need. Beyond packing meals, Tyson Foods has provided product and packaging expertise to support The Pack Shack’s mission.”

Bret Raymond concluded, “To host a Feed the Funnel party, a group needs an indoor location, tables, participants, and $0.25 per meal. We bring everything else needed to pack the meals, from hairnets and gloves to ingredients, supplies and equipment, to a high energy playlist and, of course, a huge gong. Parties can be hosted any time of day, any day of the week.”

Groups are invited to host a Feed the Funnel party to benefit their community by reserving a date at www.thepackshack.org.

About The Pack Shack

The Pack Shack is an Arkansas-based non-profit that works to supply provisions and opportunities for neighbors in need. Since 2013, more than 150,000 people in 40 states have packed over 30 million delicious healthy, meals for neighbors in need across the country. The Pack Shack started in northwest Arkansas in 2013 and has expanded to Columbus, OH and Orlando, FL and currently employs 11 full time people. Further expansion plans are underway. Learn more about The Pack Shack and their Feed the Funnel parties at http://www.thepackshack.org.