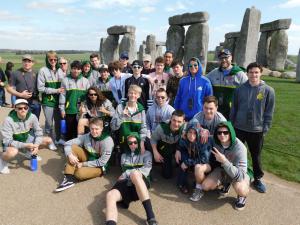 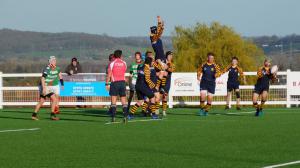 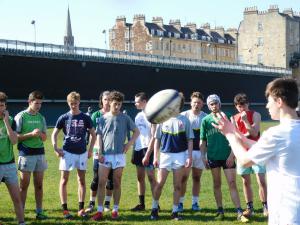 PAC Misfits at a training session in Bath England on their tour to England & Wales. The tour was organised by Irish Rugby Tours.

…it was a great experience that was packed filled with history, culture and rugby. We will be back for our third tour soon.”

DUBLIN, CO. DUBLIN, IRELAND, May 27, 2019 /EINPresswire.com/ — Spring Break 2019 is one that will live long in the memory of PAC Misfits Rugby. The club are big players on the Colorado rugby scene and this year 45 players, coaches and family members took a rugby tour of a lifetime to England and Wales where they were exposed to what tour leader Hugh Miller described as “an amazing rugby culture”.

The tour was organised by one of Europe’s most experienced rugby tour specialists, Irish Rugby Tours, and involved a nine-day itinerary that was packed to the brim with rugby, fun, culture, history and finger lickin’ good food.

From the moment they stepped off the plane, the squad from Colorado were taken to the beating heart of rugby in these islands. A storming training session with London Harlequins was followed by a top-class Premiership clash involving their hosts and this year’s European Rugby Cup Champions Saracens.

The team were also treated to an Under 18’s Six Nations game involving future stars of international rugby from England and France. There were competitive games against the wonderful Cheshunt RFC in England and Ysgol Gyfyn Ystalyfera School in Wales. The US squad were given cutting edge insights into the future of rugby with no fewer than three training sessions including one at the grounds of the historic Bath Rugby Club.

The group were keen to experience as much culture as possible and Irish Rugby Tours laid on a veritable smorgasbord of cultural highlights that did not disappoint. Though they did not see the Queen at Buckingham Palace they did manage to see quite a bit of her back garden from the awesome London Eye. Trips to the Imperial War Museum and the Tower of London were other highlights of their time in the English capital. Further south, the group experienced the weird and wonderful wonders of Stonehenge before arriving at the beautiful city of Bath named after the spectacular Roman Baths that can still be visited today.

In Wales, the team were brought back to the time of coal miners and metalworkers in Blaenavon before they took the chance to wash the coal dust away when they visited Cardiff White Water Rafting Experience. At the Principality Stadium they saw where this year’s Six Nations Champion’s Wales whitewashed everyone in their march to the Grand Slam glory and took away with them the sense of a country obsessed with the oval ball.

Head Coach and Tour Leader Hugh Miller said: “This was our second time with Irish Rugby Tours and as always it was a five-star tour. The locations were great, the coaches were really professional and we were exposed to an amazing rugby culture. Overall it was great experience that was packed filled with history, culture and rugby. We will be back for our third tour soon.”

Irish Rugby Tours is based in the heart of Munster. The company has been organizing and hosting both Irish and international rugby tour groups for over sixteen years. In that time, it has built strong and trusted relationships with rugby communities, rugby coaches, activity and accommodation providers across Ireland, the UK, continental Europe, the United States of America, Canada, Australia, New Zealand and South Africa.

Its history with USA Rugby goes all the way back to 1987, when the company's chairman was one of the head coaches to the USA Eagles prior to the first World Cup in New Zealand. Since then their connection with Rugby in the USA has gone from strength to strength.

Irish Rugby Tours has a strong connection with USA Men’s & Women’s Rugby. We worked with the US Women Eagles team during the Women’s World Cup as well as high school, club and college teams on their first trip abroad. This experience has given us a keen understanding of the needs of teams and their coaches.