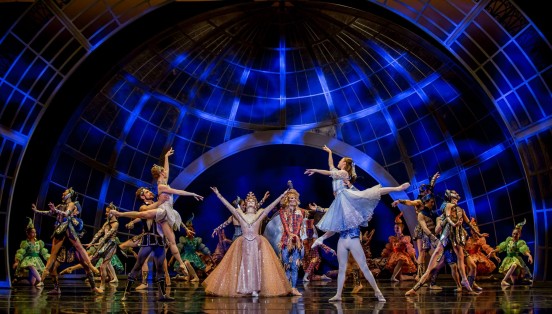 TULSA, Okla., May 30, 2019 – Tulsa Ballet closes one of its most successful seasons with the announcement that it has achieved its $25 million Defining the Future Campaign – the largest fundraising initiative in the history of the company.

The integrated campaign exceeded its goal by raising a total of $25.2 million, thanks to a $450,000 major gift from the Lou and Connie Miller Charitable Foundation and trustees Kirk Clausing and Max Vowel.

Funds raised from the campaign are being used to:

·         Broaden the reach of the Tulsa Ballet Center for Dance Education.

·         Increase the Tulsa Ballet endowment to provide for the long‐term sustainability of the organization.

“We are especially grateful for the Lou and Connie Miller Charitable Foundation’s gift, which has helped us reach the finish line for this campaign,” says Scott Black, Tulsa Ballet’s Managing Director. “As a World War II veteran, Lou Miller became an entrepreneur establishing L&M Office Furniture as a successful Tulsa-owned business and finding continued success through real estate investments. I am sure that Mr. Miller would be pleased that his legacy of philanthropy is being carried out by the trustees of his foundation.”

Marcello Angelini, Tulsa Ballet’s Artistic Director, says, “The Defining the Future Campaign was developed to substantiate the relevance of dance in our community for decades to come, through audience growth and education, and the long-term artistic and financial health of Tulsa Ballet. We are thankful to every individual who contributed to this campaign, and for their investment in the future of the arts, culture and quality of life of our community.”

About Defining the Future – An Integrated Campaign for Tulsa Ballet

This facility, designed by Bob Schaefer of Selser Schaefer Architects, opened in 2016 as part of Tulsa Ballet’s 60th anniversary season to support the growing needs for ballet training, education and outreach programs.

The school houses the Ann and Jack Graves Studios and the Anne and Henry Zarrow Foundation Performance Studio, a state-of-the-art, in-house theater with a seating capacity of 160. Additional funding came from the JE and LE Mabee Foundation in the form of a challenge grant, and the Lou and Connie Miller Charitable Foundation, along with multiple individuals, corporations and foundations.

Creation of New Productions
Mollie Williford provided the lead gift to support capital funds for new productions, including this past April’s world premiere of Tchaikovsky: The Man Behind the Music by resident choreographer Ma Cong and the world premiere of Dorothy and the Prince of Oz by Edwaard Liang in collaboration with BalletMet of Columbus, Ohio, that debuted in 2016.

Additional capital funds from the HA and Mary K Chapman Charitable Foundations and the Suzanne and Jim Kneale Family Foundation have been raised to support an all-new production of The Nutcracker to premiere in a future season.

Gifts to the Tulsa Ballet endowment have been established to support essential programs in perpetuity.

Lead gifts have been committed by:

About Tulsa Ballet
Since 1956, Tulsa Ballet has evolved from a small regional ballet company to a nationally and internationally recognized arts organization. For 24 years, the organization has thrived under the leadership of Artistic Director Marcello Angelini.

Today, Tulsa Ballet consistently attracts the finest choreographers in the world, employs around 30 professional dancers from around the world, 25 full‐time artistic and administrative staff members and a pre‐professional ensemble composed of 12 American and international young dancers, all graduates from the top ballet academies of the world.

This year, Tulsa Ballet fulfilled its role as an Oklahoma cultural ambassador by representing the city and state in Italy, Switzerland and Spain on the company’s first three-country tour.

Performing to sold-out crowds in six of the top venues, Tulsa Ballet received standing ovations and was called by the European press, “without a doubt, within the Top Ten American ballet companies,” and “one that, for decades continues to enrich the international landscape of our field” and “a company made up of 30 dancers from 14 countries, dancers who are absolutely extraordinary for their technique and versatility … Tulsa Ballet’s work was truly exceptional.”