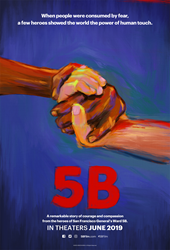 “We are honored to accept these awards for 5B on behalf of Johnson & Johnson,” says Daryl Lee, Global CEO, UM. “As UM Studio’s first-ever Grand Prix win, we are so gratified by the amazing and well-deserved recognition for this extremely powerful film, and we look forward to creating more award-winning content in the future.”

5B is the inspirational story of everyday heroes who took extraordinary action to comfort, protect and care for the patients of the first AIDS ward unit in the United States. 5B is stirringly told through first-person testimony of these nurses and caregivers who built Ward 5B in 1983 at San Francisco General Hospital, their patients, loved ones, and staff who volunteered to create care practices based in humanity and holistic well-being during a time of great uncertainty. The result is an uplifting yet candid and bittersweet monument to a pivotal moment in American history and a celebration of quiet hero’s worthy of renewed recognition. Watch the trailer here: https://www.youtube.com/watch?v=_VOpZMUe964&t=11s

“5B is an important story for Johnson & Johnson to tell as it reminds us all how far we’ve come in the fight against HIV,” said Michael Snead, Executive Vice President, Global Corporate Affairs and Chief Communications Officer, Johnson & Johnson. “By going back to the start and celebrating the essential, yet often overlooked contributions of nurses, the film shows the humanity in healthcare, and shines a light on urgent health issues facing future generations.”

“We are incredibly proud and humbled to share the stories of these brave men and women who pioneered San Francisco’s first AIDS ward against all odds,” said Brendan Gaul, Global Chief Content Officer, UM and Head of UM Studios. “This film is brand-funded content at its best – staying true to Johnson & Johnson’s core values while letting the stories of heroism and care speak for themselves, at the epic scale that only cinema can. I hope this film helps bring some perspective and education of the past, so we can continue to make strides in the future.”

UM Studios is the branded content unit of UM focused on creating content & experiences for moments that matter by offering brands access to the content community at-large. Through the co-creation of content developed to bring brand ideas to their fullest expression across media plans, UM Studios creates momentum for brands through unique relationships with production, talent and media partners.

ABOUT UM
UM is a strategic media agency committed to proving that media is a topline growth driver as much as an efficiency play. We believe that better science and better art deliver better outcomes for our clients. We deliver science through the transformational power of business analytics and real-time data intelligence. We deliver art through creating moments that matter in media to deliver momentum for brands. As the leading global media network in IPG Mediabrands, UM operates in over 100 countries, with more than 5,000 people innovating on a roster of global clients including Accenture, American Express, BMW, Coach, Coca-Cola, ExxonMobil, Fitbit, GoPro, Johnson & Johnson, Quicken Loans, Sony, Spotify and The Hershey Company.