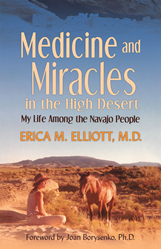 “This book is sorely needed at this moment in America…'Medicine and Miracles in the High Desert' reveals how diversity and inclusiveness can enrich our own society—a lesson on which our future may depend.” – Larry Dossey, MD

Author Erica Elliott, M.D., also known as the ‘Health Detective,’ has had many life altering adventures which helped form her into the inspirational medical doctor and public speaker she is today. In her debut book, “Medicine and Miracles in the High Desert: My Life Among the Navajo People” Elliott recounts the early years of her extraordinary life which included living among the Navajo people.

As a young woman in the early 1970s, Elliott taught at a Navajo Reservation boarding school in Arizona where she ultimately became a student of their mystical, earth-centered wisdom much of which has been lost in today’s modern world. She was allowed the privilege to learn their ancient spiritual ways after being determined to reach across the cultural divide by learning the Navajo language which opened up their world to her as she was embraced by their community. After her time as a teacher, Elliott found her calling to help heal others and received her medical degree and eventually returned to serve the Navajo people as a medical doctor in an underserved clinic, performing emergency procedures and delivering babies.

“This book is about bridging the cultural divide through efforts to understand and see the world through the eyes of other people — the people who were here first as well as to educate readers about the Navajo way of life, without revealing sensitive information about sacred ceremonies.” explained Elliott.

“This book is sorely needed at this moment in America, when divisive voices incessantly warn us of the other, the foreigner, those who “are not like us.” 'Medicine and Miracles in the High Desert' reveals how diversity and inclusiveness can enrich our own society—a lesson on which our future may depend.” – Larry Dossey, MD, author of One Mind: How Our Individual Mind Is Part of a Greater Consciousness and Why It Matters

This true story of personal risk and high adventure paints a rare, contemporary picture of Navajo life that at once elicits inspiration, deep sadness and respect for the Native American people. In “Medicine and Miracles in the High Desert,” Elliott not only opens up a world that is foreign to many but also brings to light the continued prejudice experienced by Native Americans. To learn more please visit http://www.medicineandmiraclesinthehighdesert.com.

ABOUT THE AUTHOR
A risk taker and true adventurer, Erica Elliott, M.D. is a rock climber and mountaineer in addition to being a successful medical doctor with a busy private practice in Santa Fe, New Mexico. She led an all-woman’s expedition to the top of Denali in Alaska, the highest peak in North America, where nearly half of all attempts fail. She has lived and worked around the world, serving as a teacher for Indigenous children on the Navajo Reservation in Arizona and in the mountains of Ecuador. In 1993, Elliott helped found The Commons, a co-housing community in Santa Fe from where she runs her practice. Known as the “Health Detective,” she treats mysterious and difficult-to-diagnose illnesses. Elliott is also a captivating public speaker and has given workshops at various venues, including the Esalen and Omega Institutes. She blogs about medical insights and stories from her life at http://www.musingsmemoirandmedicine.com and has two additional memoirs planned.