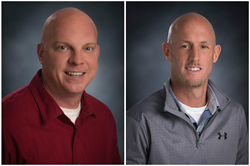 Scott Warner and Todd Mower have been promoted to Regional Directors of Construction for Wayne Homes.

Wayne Homes, an Ohio-based custom homebuilder, has announced the promotions of Todd Mower and Scott Warner to Regional Directors of Construction.

In their new roles as Regional Director of Construction, Mower and Warner will be responsible for working with construction management teams to set directions and goals, as well as guiding managers through the use of coaching and feedback tools with their teams.

Mower began his career with Wayne Homes in 2005 as a field manager for the Ashland office. In 2011, he was promoted to Construction Manager and was responsible for maintaining relationships with homeowners, co-workers and trade partners, as well as, leading a team responsible for building scattered site homes throughout the Ashland building area.

As one of the Regional Directors of Construction, Mower will lead the construction teams at the Bowling Green, Delaware, and Ashland, Ohio and Hartland, Michigan locations.

“As the Construction Manager at the Ashland office, Todd has built and developed a great team of leaders in customer enthusiasm and trade relations,” Senior Vice President of Construction, Steve Wessel, said. “His knowledge of our company, culture, systems, and procedures will be an asset to the teams that he will lead in his new role.”

Mower is a graduate of the University of Akron. He currently resides in Burbank, Ohio with his wife, Jamie, and their three children, Brynn, Kael, and Noah.

Warner joined Wayne Homes in 2003 in the estimating department. Since then, he has held several management positions, including Estimating Manager, Product Development Manager, Field Manager, Warranty Manager, and most recently, Sales Manager of the Portage location.

As a Regional Director of Construction, Warner will lead the construction teams at the Portage, Belmont, and Newark, Ohio and Pittsburgh, Pennsylvania locations.

“Scott brings a wealth of knowledge about our customers and our business that will help build our brand and teams,” Wessel said. “Scott also led the Portage team to be the first Sales team to exceed their annual sales goal for this fiscal year.”

Before Wayne Homes, Warner served in the United States Army and Army Reserves. Warner currently resides in Sebring, Ohio with his wife, Lori, and has three daughters, Ashley, Abbigail, and Hannah.

For more information about Wayne Homes, or to inquire about job opportunities, visit WayneHomes.com.

Wayne Homes is a custom home builder in Ohio, Pennsylvania, Indiana, Michigan, and West Virginia (see all Model Home Centers). We offer nearly 50 customizable floorplans and a team dedicated to providing the best experience in the home building industry. For more information, Ask Julie by live chat or call us at (866) 253-6807.