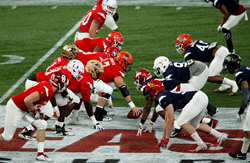 Make no mistake, Tropicana Field is on Florida’s west coast. And when it comes to the East-West Shrine Game the West team owns it, extending their winning streak to four straight and six-of-eight contests in the dome.

On the ensuing drive, East running back Ty Johnson (Maryland) racked up 42 all-purpose yards rushing on 2 carries and a catch before the drive stalled (turned over on downs) at the West 27 yard line.

The next two drives ended in booming punts, with West punter Jack Fox (Rice) booting a 57-yarder and the East’s AJ Cole III (North Carolina State) answering with a 60 yard kick. The pair would kick 9 times, with Fox pinning the East inside their 20 three times and Cole averaging 50 yards per kick.

In the second quarter, West safety Tyree Kinnel (Michigan) recovered a fumble after a long completion and returned it 32 yards to the East 2 yard line. On the following play, running back Devine Ozigbo (Nebraska) would score the West’s second touchdown. (Baron’s PAT good).

The first half came to an exciting close with a 61-yard field goal attempt by Baron coming up just short of the crossbar. The attempt was received 9 yards deep in the end zone by East DB Jimmy Moreland (James Madison). Moreland returned it 61 yards before being slowed by Baron and tackled by long snapper Chris Wilkerson (Stephen F. Austin State).

On the third possession of the second half, West linebacker BJ Blunt (McNeese State) intercepted a pass on third down and returned the ball 21 yards to the East 22. The West offense cashed in on the turnover on the next play with a pass from Easton Stick (North Dakota State) to Shawn Poindexter (Arizona) to make the score 21-0 (Barron PAT good).

Three plays later West defensive back Mazzi Wilkins (South Florida) intercepted another East aerial and returned it 31 yards to the East 35. The East defense forced the West to turn the ball back over on downs after a 12-yard sack by Tre Watson (Maryland) on first down kept the West behind the sticks.

That defensive stand signaled a change in momentum with the East taking over on their own 26 and quarterback David Blough (Purdue) leading a drive that culminated with a 6-yard touchdown pass to Terry Godwin II (WR, Georgia) to finally get the East on the scoreboard with 2:52 left in the third quarter. (Kicker Matthew Gay from Utah converted the PAT).

The East defense held the West to a 4-and-out on the following drive, returning the ball to their offense with two minutes left in the third quarter. On the first play, a 37-yard pass interference penalty flipped the field. The East put up another touchdown when Blough again found Godwin with 12 seconds left in the quarter. Gay’s PAT cut the West lead to 21-14.

On the ensuing drive the West squad drove to the East 17 before a fumbled snap was recovered by linebacker Jordan Brailford (Oklahoma State) ended the threat.

East QB Jordan Ta’amu (Mississippi) led the team on a 12-play drive culminating in a 47-yard field goal by Gay to close the gap to just 4 points with 4:19 left in the game.

The West stumbled out of the blocks, but their drive was extended by a roughing the passer penalty on third down. After that they rode running back Darrin Hall Jr. (Pittsburgh), who carried the ball the next seven plays – including one carry for 39 yards – to milk the clock. A failed fourth down conversion turned the ball over to the East on their own 13 yard line with just 4 seconds on the clock.

On the game’s final play, the East attempted a lateral play that was stymied when the first lateral was fumbled and recovered by Blunt to end the game.

West RB Hall ended the day with 77 yards rushing to lead the game, and East QB Blough led all passers with 10 completions for 149 yards. East receiver Godwin was the game’s Offensive Most Outstanding Player with 80 yards on 4 catches with a pair of touchdowns.

The Defensive Most Outstanding Player was West linebacker Justin Hollins (Oregon) who ended the game with 10 tackles (9 solo), 2 sacks, and 3 TFL.

About the East-West Shrine Game: Originating in 1925, the East-West Shrine Game is the longest-running college all-star football game in the country and features some of the highest-rated players in the projected NFL draft ranking. While the teams are divided by East and West, the players come together for the beneficiary of the event, Shriners Hospitals for Children. Learn more at http://www.shrinegame.com.