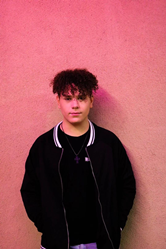 What do you want to do in the next 5 – 10 years? I want to be on the radio, on the billboard top charts. Tours, albums and on TV shows; making a difference in the world.

Will B Whitesell, known on social media as “The Official WillB,” is young, passionate and multi-talented! He is no stranger to the limelight, with his artistic background in acting, modeling, is also songwriter and singer, he is well seasoned in show business. He has performed with Conan O’Brien, John Legend, Eric Roberts, Lorenzo Llamas, Jojo Siwa, Becky G, and Silento (Watch Me Whip/Nene) amongst others. The sixteen year old teenager is a social influencer, with over 120k followers on Instagram. Affectionately known as WillB, he came to Uplive USA almost 6 months ago, with over 65k+ fans. He wows his fans with his musical abilities, as he can play piano, guitar and the ukulele. Sometimes he sings, other times he chats, and almost always he is smiling, laughing and bringing joy to those that watch him.

While with Uplive, WillB has participated in the vocal challenge, “You Can, You Up!” where he amazes thousands of fans from around the world for 30 minutes at a time, performing for over 30,000 viewers. He also performed live at the Host Appreciation Party in December 2018, celebrating the one year anniversary of the app in the US.

WillB shares his talents with others his age, as a performer with the SOS Tour (Stand Up, Own Up, Speak Up), advocating for young adults who are coping with adversities such as violence, bullying, sexual harassment, peer pressure for sex, drugs, and alcohol, including those that suffer from self harm, dropping out of school or even suicide. The tour reaches out to high schools to spread the message of inclusion and hope. The US tour begins on March 1 through June 2019, kicking off in Los Angeles. They will perform in 48 states, including major cities such as Manhattan, Chicago, Dallas and Las Vegas. SOS has gained major entertainment backing support from SM1 Sony Music and Netflix.

Much like SOS, WillB is an advocate for charity work and good causes. He has supported programs that benefit those with cancer, diabetes and the homeless. He believes in giving back, using his talents for a good cause, bringing joy to others. Will recently was featured in the great John Legend’s newest music video which dropped on February 19th, “Practice What You Preach,” in which he plays the role of a teen shooter. The MV was created as part of FREEAMERICA, organized by John Legend to benefit those that are impacted by the criminal justice system, challenging stereotypes, and helping build equitable communities across America.

WillB already has two singles, “Stars Collide,” and “Until the Song Ends” that are on Apple Music, Spotify and iTunes. He is putting the final touches on his EP which will drop with two new songs later this year. His new EP is produced by Chris Rosa, who has worked with Chris Brown, Jamie Foxx, Ru Paul, Rod Stewart, and many more. All his songs have engaging music videos on YouTube.

In a recent interview with Uplive, WillB shared his thoughts and reflections, “Q & A Time.”

Where were you born: Las Vegas, NV
How long have you lived in LA? Three years.

Do you miss Vegas? I prefer LA. Even when I lived in Vegas I would drive 3-4 hours on weekends to come to LA.

How did you get into live streaming? I have my own YouTube Channel, I’ve also hosted my own radio show, so it was a natural turn of events.

Who has had the biggest impact on your life? English singer, songwriter Dua Lipa. She debuted in 2017 with song and MV, “New Rules,” and I really like her music and what she stands for.

Besides your EP, what other plans do you have this year? I will be featured in a movie called “Bleach,” which I played the role of an abused teen, with an alcoholic, drug addict father, Eric Roberts, and it’s pretty intense. It should be released in three to four months.

What are three words that best describe you? Musical, Outgoing and Comical. I’m also passionate.

How did you get into Show Biz? When I was about 8 years old, I was singing and dancing around the house, with long hallway, and upstairs platform. I’d put on my own shows there. I took lessons and then performed in malls, and ended up going to an audition for musical and got the role.

What do you want to do in the next 5 – 10 years? I want to be on the radio, on the billboard top charts. Tours, albums and on TV shows; making a difference in the world.

On a scale from 1 – 10, how would you rate Uplive? TEN! I really like the people, especially the staff that works at Uplive. I like how they support the hosts. I really like Uplive.

Uplive was founded in May 2016, a subsidiary of Asia Innovations Group (AIG). Uplive is a live-streaming application that allows users to broadcast and view real-time videos via their smart devices.