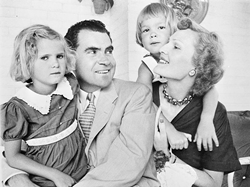 “Nixon has gone through all kinds of revisionist cycles.” – Brian Balogh

BackStory, an American history podcast produced by Virginia Humanities, releases “Nixon Beyond Watergate: A History of the Presidency Before the Scandal.”

Today the presidency of Richard Nixon is mostly remembered for how it ended – with the Watergate scandal, impeachment and resignation. But what about early Nixon, the man sworn into office in January 1969? On this episode, Nathan Connolly, Ed Ayers and Brian Balogh discover Nixon ran a more imaginative and ideologically flexible administration than its ignominious ending might suggest.

“Nixon Beyond Watergate: A History of the Presidency Before the Scandal,” is available now. Find it and every episode of BackStory on the website (http://www.BackStoryRadio.org) or on popular podcatchers including iTunes, Spotify and Google. BackStory publishes every week at noon and is available for free.

About BackStory: BackStory brings historical perspective to the America of today. Each week, U.S. historians Ed Ayers, Brian Balogh, Joanne Freeman and Nathan Connolly look at current issues and trace them back to their roots in American history. From the days of the Early Republic to the 21st century, BackStory reveals the connections (and disconnections) between the past and the present. BackStory makes history accessible for listeners – not only in the United States, but around the globe.

BackStory is available for free on Apple Podcasts, Google Play, Spotify, Stitcher and other apps. Get new episodes delivered directly to your device by following BackStory on your preferred podcatcher. New to podcasts? Just search for BackStory (and look for the blue logo in the “Society and Culture” category) and then click “Subscribe.”