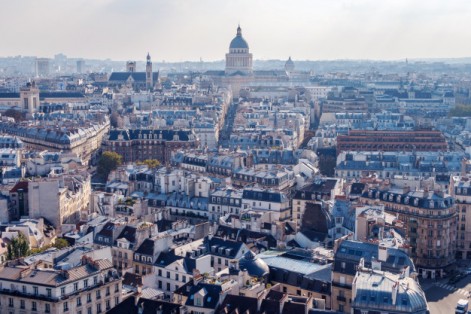 AMPAC USA and major companies across the world have been working round the clock to develop sustainable projects that could put less pressure on the earth. After the Paris agreement in 2015, even though many countries and major corporations have worked towards reducing their carbon footprint, CO2 levels have risen in the past four years.

LOS ANGELES, May 29, 2019 – ​​​​Recently, Carbon Dioxide levels in the atmosphere reached a record high in the history of the earth. As this increase brings the earth yet a bit closer to climate change, AMPAC shares the current state of affairs related to The Paris Agreement that had given the world a glimmer of hope towards lesser emissions and more sustainability.

Climate change, environmental pollution, even carbon dioxide has never had the limelight for long on any of the news portals. The last time these topics had seen some of the light was in 2015 when nearly 200 countries in the UN came together to set a sustainable goal for themselves. Since then, not much has been discussed about it on the global level, until a few weeks ago.

Earlier this month, major news broke through the internet that caught the attention of the common folk as well. Carbon Dioxide levels in our atmosphere reached a record 415.26 parts per million. The last time CO2 levels were this high was nearly 3 million years ago when sea levels were up and Antarctica had greenery.

“The Paris Agreement had aimed at countries restricting their carbon emissions to 2 degrees Celsius or 3.6 degrees Fahrenheit per year over preindustrial levels even aiming for 1.5 degrees Celcius if possible,” mentions Sammy Farag, CEO of AMPAC USA. “But in the last four years since that agreement, tracking the progress has shown that the levels keep increasing year after year.”

The countries had been given 15 years, till 2030, of which four years have already passed by and the world is closer to a climate shift than reaching its goal. Wolfgang Lucht from the Potsdam Institute for Climate Impact Research (PIK) agrees. “It shows that we are not on track with protecting the climate at all. The number keeps rising and it's getting higher year after year.”

The Current State Of Progress

Even after several years of awareness among the people via various mediums, countries have failed to reach their carbon emissions goals. Except for a select few countries, almost every other nation today is facing challenges reducing their carbon footprint. The United States, for example, saw a change in administration since the agreement. While still in office, Barack Obama, the former President of The United States, helped structure a plan that kept the country in accordance with the agreement. This can be seen in various utility departments that have shifted from burning coal to cleaner energy sources.

However, the current President, Donald Trump has made it clear that his administration will not work to fulfill the agreement and has gone forward to dismantle the previous administration’s set-up. This could put the country far behind its carbon emission goals and a lot of pressure on the coming administrations. A few states like New York and California have begun pursuing their own policies for renewable energy but it won’t be enough to close the gap.

The European Union will fall slightly short of its goal if it goes on the current pace. Ever since the agreement was made, countries made some severe reforms in the daily operations to get the track to where it is today. Back in September 2018, Paris and Brussels banned private cars on the roads for a day and asked the continent to join in. Today, Greater Paris is looking forward to banning old diesel cars from the summer of 2019. Their reforms have been massive and are looking good on the books. But the Union plans to be more ambitious with their carbon level targets to meet their goals overall.

In June 2018, the officials met and agreed on implementing new measures for renewable energy and efficiency. They then debated on revising the targets of 2030 for deeper emission cuts. The EU may just be the thin door holding off the catastrophic events that may occur for a little longer. Even though the union has made better progress than the others, the continent still may face a major challenge from its members. While Britain and the Netherlands have vowed to phase out coal as a source of energy, Poland is currently building coal plants.

Better Goals Could Give A Chance
Similarly, China faces a huge task in front of it. Being the most populated country in the world, it is more crucial for them to work on a swift strategy to reduce their footprint. Analysts say that of all the countries, China had made goals that were easy to meet. By 2030, they had pledged to work with 20% nonfossil resources. Today, it is likely for them to reach their target. The country sells more electric cars and buses than anyone else. Their demand for coal is expected to level off in the mid-2020s and the government is investing heavily in solar, wind and renewable energy technologies.

But unless the country takes major steps to decrease its emissions significantly rather than just leveling off, the world altogether can never reach its 2-degree goal. If China decides to change its goals to an even more ambitious number and tries to reach them with an aggressive approach, it could give the world a chance and more time for others to pick up the pace.

Corporations Need To Step Up

The responsibility of bringing such a huge change does not solely lie in the hands of a nation’s administration but in every individual’s hand who can do something about it. Even though common people on the ground level can decide to not use plastic or pollute the environment around them, a major chunk of this change can be brought about if corporations pledge to change their operations. And Farag agrees.

“We have seen enough by now to know better, the world needs a better and sustainable working environment for us to keep going. At AMPAC USA, we try to make sustainable solutions even in water technologies that could be forgiven for its importance. We have tried to put more research into building Solar Powered Water Purification Reverse Osmosis Systems that are economical, efficient and durable in the long run for clients and even countries to use. Our goal is to develop technologies that make the reduction in carbon emissions simple and help our country reach the goal sooner.”

Many other corporations have stepped up their game in sustainability too. More and more corporations are building green infrastructures with zero waste and changing their operations to meet their personal environmental goals. While many bigger companies still need to step up their game. Employees have been coming together to make sustainable goals for their companies to be a part of the struggle. If corporations join hands in this agreement, we would be able to reach our goal at a faster pace than we are on today.