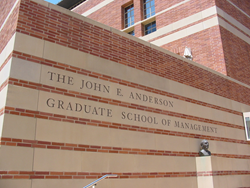 When you see 10 year US Treasury Bonds somewhere in the 2-2.5% range, it leads me to believe that US equities may still perform better. Until interest rates approach 3.75% or greater, I think stocks will continue to look appealing.

Ken Van Wagenen, one of the original founders of the investment subsidiary of Wells Fargo originally started work in Los Angeles. As a UCLA Anderson business school alum, he had a lot to say when asked about his views on the economy and current trends in the market.

Ken Van Wagenen touched on a number of points, including:

Remarks on Current Stock Market Valuations
With interest rates continuing to stay relatively low, Ken Van Wagenen noted that valuations make sense and in fact there could still be a little more room to run. Ken mentioned that we have to measure probable future returns while factoring in where the US government bonds are trading. Ken also noted, “When you see 10 year US Treasury Bonds somewhere in the 2-2.5% range, it leads me to believe that US equities may still perform better. Until interest rates approach 3.75% or greater, I think stocks will continue to look appealing”.

Ken could not overestimate how important interest rates are to relative valuation of US equities. Ken mentioned that if we knew interest rates were going to remain low for quite some time, he would use most of savings and maybe even take advantage of leverage to find ways to maximize returns. Few would have thought rates would stay so low for almost 10 years now. At current levels, equity total returns should exceed the bond market in total return. If we knew these interest rate levels were going to continue, Ken argues that every savvy investor would leverage US Treasury bonds and go long the S&P 500. This would be the recipe for continued extended gains.

Most analysts, however, expect interest rates to move higher over time. Ken Van Wagenen noted that he has rarely profited by guessing and trading the stock market – Ken's equity investments are typically quality blue chip well-known and respected companies that many would consider to be “value plays” for various reasons.

As rates continue to increase, Ken feels there will come a time when stocks are correctly valued or even overvalued. Ken believes that it will be interesting to see who President Trump entrusts as chair of the Fed going forward. Ken feels that this could be something that will give a shake up to the short-term stock volatility metrics, which are currently near all-time lows.

Trump’s Tax Cuts
Ken Van Wagenen noted that much of the recent run up in the market could be credited to the Trump administration’s plans for tax cuts. The recent talks of both corporate and individual tax cuts certainly make investors optimistic. Future tax cuts also make investors unwilling to sell current holdings with large gains. Ken feels that it certainly wouldn’t be prudent to take a gain now at a higher tax rate, when taxes could be lower in a few months. At the current moment, it would be smarter to sell stocks with losses rather than gains. Ken also expressed that we need to be patient and within months we will likely know the plan and can coordinate how to be most tax efficient.

Views on the Financial Services Industry
Ken Van Wagenen has been really pleased with the recent upward movement in the banking sector. Since the election, the banks have recovered steadily. The perception of rising rates, coupled with hopes of tax reform and deregulation has likely been the largest catalyst. One step toward deregulation, is politicians advocating the repeal of Dodd-Frank, a major piece of banking regulations adopted in the wake of the Great Recession. Furthermore, Ken noted that the loosening of capital and liquidity guidelines are pivotal in hopes of easing banks' ability to lend.

Ken Van Wagenen's favorite bank at the moment remains Citigroup. Since 2009, Ken noted that Citi has been hit harder than any major bank and is finally starting to gain back some of that ground along with Bank of America. Even with the recent move up into the $70’s, Citi is still below book value. Ken feels there is still plenty of room for Citi to run and in time it could be trading well above $100. Ken also mentioned that it doesn't hurt his view of Citi to have his son, Ryan Van Wagenen, rejoining their Investment Banking division back in London.

Q&A / Closing Remarks
Ken Van Wagenen said It’s always a pleasure to share his thoughts with fellow UCLA friends and be part of any interview or session. From the questions he hears routinely, Ken feels the bar has been raised among UCLA alums and there is a lot of great talent among Bruin peers. Ken wishes all UCLA business school alumni continued success and looks forward to hearing about all future Bruin accomplishments.

Shortly after graduating from UCLA, Ken married and later had two children, Melissa and Ryan Van Wagenen. Melissa has a Masters Degree in Psychology and works as a student counselor for various high schools in the bay area. Ryan Van Wagenen is following in Ken’s footsteps, and has been working in finance the past 7 years for Citigroup and UBS. Ken currently lives in the Los Angeles area and enjoys serving in his local church in Pasadena. Ken has also been involved with philanthropic endeavors and has held many charitable fundraisers to benefit worthy local causes including the Pasadena Museum of History.