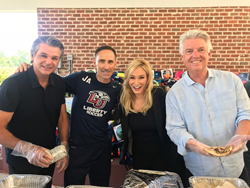 Liberty University Head Men’s Soccer Coach Jeff Alder and two members of his coaching staff partnered with a group of prominent evangelical leaders to provide a day of fun, food, and activities for immigrant children on Friday, July 13.

The event was held at Youth For Tomorrow's campus, a residential children’s program in Bristow, Va. The facility is one of over 100 in the country that is caring for undocumented immigrant children while they are waiting to be connected with family members in the U.S. or placed in foster care.

Alder and assistant coaches Jose Gomez and AJ Madero were invited by Todd Lamphere, pastor of global outreach for Paula White Ministries and a former Flames soccer player, to provide a soccer clinic for about 100 children, ages 10-17, who are being housed at the facility. White, senior pastor of New Destiny Christian Center, helped out at the event, along with Dr. Jack Graham, pastor of Prestonwood Baptist Church; Jentezen Franklin, senior pastor of Free Chapel; Johnnie Moore, CEO of The KAIROS Company and an alumnus and former vice president at Liberty; and Bishop Harry Jackson, senior pastor of Hope Christian Church. Many of the evangelical leaders who helped host the event have served as advisers to President Donald Trump.

“Pastor Todd felt that soccer was the one sport that would really appeal to the kids based on their backgrounds, so we jumped at the opportunity to serve and represent Liberty,” Alder said. “Soccer has the ability to bring people together, even when we are from different backgrounds and cultures, and we felt it was important for us to be salt and light to these kids and be the aroma of Christ at every point of contact.”

When the children came out of their classrooms to start the camp, Alder said, “They walked across the fields to see our staff and the piles of soccer balls, and you could see the smiles, the pure joy, and the energy level from the group. They loved the soccer event and spending time with our staff. We were able to work with them on their passing, receiving, dribbling and shooting.”

The coaches held clinics in the morning and the afternoon and ended each session with a soccer game. Between sessions, the coaches and pastors served the children a lunch of Central American food. At the end of the day, Alder shared the Gospel with the group, with Madero translating in Spanish.

“I opened by sharing that the common denominator for our staff from Liberty University Soccer was a soccer ball and a relationship with Jesus Christ,” Alder said.

They gave each child a Liberty University Camp drawstring bag with a Liberty Frisbee, flashlight, water bottle, and pen. They also received a backpack filled with school supplies as well as a duffle bag with toiletries and clothing, all donated by the participating churches.

“The experience for our staff was extraordinary,” Alder said, “and we are blessed by our time with this special group of kids who ended up giving us much more than we gave them.”

The children also played in an inflatable water park set up at the site.

The event was part of the Project Shine refugee mission initiative, for which several churches and ministries came together to provide compassionate aid to hundreds of refugee minors through a day of enrichment and hope at the Virginia facility as well as an immigrant foster facility for children in Miami, Fla.

“This was a beautiful example of people of faith working with government, in this case the U.S. Department of Health and Human Services and the Trump Administration,” Graham said. “This was one of the best experiences of that kind in my life.”

On his Instagram account following the event, Graham posted: “It was great to have the great Liberty University Soccer Coaches with us at Youth For Tomorrow event with migrant children from Central America. The kids were rockin the soccer ball and had so much fun learning from these fine coaches. Liberty is truly raising up champions as Dr. Falwell said so many times. @jerryfalwelljr and the University is a model for Christian higher education.”

Graham also complemented the facility, founded by Joe Gibbs, for providing for the physical, emotional, and spiritual needs of the children. He said the children he served at the event were primarily from Honduras and Guatemala, and that 90 percent of them came there as unaccompanied minors — not separated from their parents at the border but sent over by their parents and, sadly, in many cases, as victims of human trafficking.

“When they’re here, we see it as our responsibility to care for them and show them the love of Christ,” he said.

Graham said he was touched when he heard one of the workers tell of a little boy who was able to call his father back home and tell him he was getting three full meals a day.

“His father was weeping on the phone that his child was being treated so well,” Graham said.

White said she also enjoyed the partnership with other ministries and appreciated Liberty’s willingness to give the children a wonderful outlet by playing a game they love.

“One of my favorite parts was when a child psychologist said to me: ‘You have given them their identity today,’” White said. “It was profound, after lengthy conversations. To us, what seems like a ‘small contribution’ of authentic love and care can literally transform a life.”

About Liberty University
Liberty University, founded in 1971, is the world’s premier Christian university, the largest private, nonprofit university in the nation, and the largest university in Virginia. Located near the Blue Ridge Mountains on more than 7,000 acres in Lynchburg, Va., Liberty offers more than 600 unique programs of study from the certificate to the doctoral level. Approximately 350 programs are offered online. Utilizing its world class infrastructure and Christian faculty, Liberty’s mission is to train Champions for Christ with the values, knowledge, and skills essential for impacting tomorrow’s world.