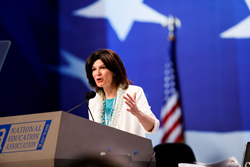 Virginia voters tonight rejected the dangerous ideology that Ed Gillespie and his allies in the Trump administration like Betsy DeVos have been lobbying. –NEA President Lily Eskelsen García

Voters in Virginia today rejected Trump-like tactics by electing Ralph Northam as their next governor. Education rose to the forefront in the election and became a key issue for voters in the commonwealth. News reports revealed Ed Gillespie received more than $100,000 from the family of controversial U.S. Secretary of Education Betsy DeVos, and during the campaign, Ed Gillespie issued a tax plan that would cut up to $400 million in state aid to public schools.

The following statement was issued on behalf of NEA President Lily Eskelsen García:

“As a pediatric neurologist, Ralph Northam has dedicated his life to protecting the well-being of children, and he is serious about doing what works so that every student has access and opportunity to a great public school. During the campaign, Ralph Northam traveled around Virginia asking educators to take a seat at the table so that he could listen and learn from the professionals in the classroom. He has promised that support for public education will be a top priority of his administration. Actions like these are why Ralph Northam earned the support of the Virginia Education Association, as well as from educators and parents throughout Virginia. They are confident he will do what’s best for students and public education.

“Virginia voters tonight rejected the dangerous ideology that Ed Gillespie and his allies in the Trump administration like Betsy DeVos have been lobbying. Virginians unequivocally said no to education cuts and voucher schemes, which steal away scarce funding from public schools in order to give to private schools that are unaccountable to the public. Voters said no to putting the wealthy first and working people last. By electing Ralph Northam as their next governor, Virginians sent a clear signal that the politics of Betsy DeVos and Donald Trump will not be tolerated in the commonwealth because they refused to embrace the politics of hate, bigotry and fear.

“There was zero question that Ralph Northam was the only gubernatorial candidate we can count on to be a champion for students. Educators look forward to working with Ralph Northam who will be a true ally to Virginia’s students and their families.”