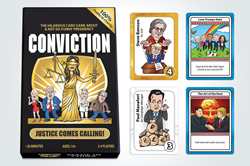 Frustrated with the presidency? Wish you could serve up some justice? Play a game of Conviction (http://www.GetConviction.com), the new satirical card game letting you and your friends convict President Trump and his cronies for their crimes against the country. Launching exactly one year since the election, Conviction chronicles the events that have transpired since President Trump took the helm. All profits from the sale of Conviction will be donated to causes under attack by the Trump Administration.

Created by game enthusiasts and best friends of 20 years Dan Peterson and Neil Patel, Conviction puts key public figures on trial in front of Lady Justice herself. The goal? Get the most points by convicting the highest-value public figures. The player with the most points wins and saves America. From Ivanka and Jared to Betsy DeVos and Paul Ryan, the gang’s all included and ready to be convicted.

After the 2016 election, Peterson and Patel found themselves oscillating between scared and angry…but mostly frustrated.

“As President-Elect Trump started discussing his Cabinet picks, Supreme Court appointments, policy agenda and White House Advisors, it became clear that this wasn’t a nightmare, but a reality that we may have to live with for the next four years,” said Peterson. “We made Conviction to channel our own frustration, and provide an emotional release to those that play the game. And it’s fun and educational.”

“After the election and through the inauguration Dan and I would send news articles back and forth to each other, but it wasn't productive,” said Patel. “Making Conviction was cathartic and actually turned a negative situation into a positive. We had a lot of fun and learned a lot bringing Conviction to life. It's our hope that players do the same while contributing to organizations that are fighting the good fight.”

Peterson and Patel will publish Conviction’s tax returns along with receipts of all charitable donations on the Conviction website http://www.GetConviction.com ensuring the profits are properly donated. Unlike President Trump.

Order Conviction today at http://www.GetConviction.com for $24.99. The game ships at the beginning of December in time for the holidays.

Complete rules can be found at: https://www.GetConviction.com/pages/rules.

About El Pen
El Pen, the parent company of Conviction, was formed to fund causes currently under attack by the Trump Administration. In the first three months, more than 250 people contributed over $25,000 on Indiegogo’s Generosity platform for human goodness to fund the game’s creation and production. Dan Peterson is an advisor to emerging start-ups in San Francisco, is a former product manager at Google, and led product design at Leap Motion. Neil Patel currently leads a Chicago-based consulting and investing firm. For more information, visit http://www.GetConviction.com.