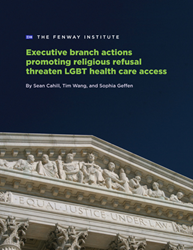 A policy brief released today by The Fenway Institute examines the potential impact of recent executive actions taken by the Trump-Pence Administration that articulate a right to refuse services to others on the basis of religious beliefs, and to refuse to hire people for programming paid for with federal funds based on religious beliefs. These actions include President Trump’s May executive order, an October memo from Attorney General Jeff Sessions, an amicus curiae brief in the Masterpiece Cake Shop case now before the U.S. Supreme Court, and documents published this fall by the U.S. Department of Human Services. The report concludes that these executive branch actions are likely to result in discrimination against lesbian, gay, bisexual, and transgender (LGBT) people in health care and at the hands of social service providers, private businesses, and government officials.

In September 2017, the U.S. Department of Health and Human Services (HHS) released a draft strategic plan for 2018-2022 that made no mention of the healthcare disparities experienced by LGBT people, as the last HHS strategic plan did. Instead, it made extensive mention of the rights of faith-based organizations and the need to “vigorously enforce laws, regulations, and other authorities”—such as a May Trump Administration executive order that could authorize religious conservatives to refuse service based on religious beliefs.

The following month, Attorney General Jeff Sessions issued a memorandum for all executive departments and agencies that authorizes faith-based health and service providers to discriminate in service provision and hiring. Sessions asserted that religious organizations “may choose to employ only persons whose beliefs and conduct are consistent with the organization’s religious precepts,” even for programming paid for with taxpayer funds.

“Under this definition of free exercise of religion, doctors could refuse to treat LGBT people, and social service providers could refuse to provide services to LGBT people based on religious objection,” said Sean Cahill, Director of Health Policy Research at The Fenway Institute at Fenway Health. “These orders and memos take the concept of religious freedom and turn it on its head. True religious freedom protects an individual’s right to worship—or not—and harms no one. But these new measures are designed so that government employees and healthcare providers can deny service or treatment to LGBT people as a group by claiming that providing such service or treatment would violate their religious beliefs or sincerely held principles.”

In 2015 and 2016, hundreds of anti-LGBT bills were filed in states around the country. Ten states have religious refusal laws that limit the ability of LGBT people and same-sex couples to access services. In some states these laws target access to health care.

The Administration’s support for a broader role for religious organizations in health care and social services is of significant concern given the lack of a federal nondiscrimination law explicitly covering sexual orientation and gender identity. In addition, Attorney General Sessions’ dismantling of Obama-era nondiscrimination regulations, and the Department of Justice’s stated belief in the Masterpiece Cake Shop brief that there is no compelling government interest to prevent anti-gay discrimination, may increase the likelihood that LGBT people will experience discrimination in health care, other services like elder care, and employment to provide these services.

“It’s well established that LGBT people experience greater disparities in health than the general population, and these disparities are rooted in stigma, discrimination, and denial of civil rights. It is imperative that the language in these orders not be interpreted as a license to discriminate by those who use HHS funding to provide healthcare and other services to the public,” Cahill added. “If these executive orders and memos are interpreted and implemented as the religious refusal laws in Tennessee and Mississippi have been, LGBT people will be harmed and their access to healthcare diminished.”

Since 1971, Fenway Health has been working to make life healthier for the people in our neighborhood, the LGBT community, people living with HIV/AIDS and the broader population. The Fenway Institute at Fenway Health is an interdisciplinary center for research, training, education and policy development focusing on national and international health issues. Fenway’s Sidney Borum Jr. Health Center cares for youth and young adults ages 12 to 29 who may not feel comfortable going anywhere else, including those who are LGBT or just figuring things out; homeless; struggling with substance use; or living with HIV/AIDS. In 2013, AIDS Action Committee of Massachusetts joined the Fenway Health family, allowing both organizations to improve delivery of care and services across the state and beyond.