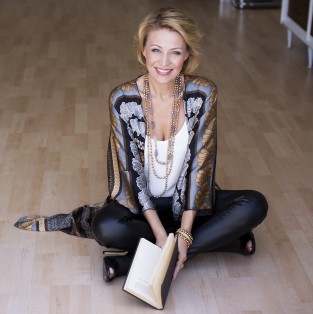 LOS ANGELES, March 22, 2019 – SocialBling Studios announces that Relatable with Stephanie Michele is now in its third season. The show is a weekly YouTube live-stream talk show spotlighting exceptional human encounters. The show features new guests each week, relational learning and encouraged self-exploration social challenges of the week to improve the quality of relating with self, other people and the world. The show can be watched live every Tuesday at 11:00 am PST.

Stephanie Michele started the show after Donald Trump was elected President of the United States in 2017. She was motivated to do something to help people feel safe to talk with each other and while many of her friends were choosing activism, she felt called to do something else. “Some of my friends were so full of outrage it was affecting their health. I was worried about them and how we were all relating in general.” As a person who has lived in three very different parts of the US, (Flint Mi, Dallas Tx, and Los Angeles, Ca) Stephanie learned a lot about human behavior and the importance of social skills. She was feeling fatigued by tactics of debate, so she developed a talk show promoting slowing down and making time for meaningful relating. “I invited guests to share their experiences and passions.  We talked about injustices that needed attention, lessons learned and things we love.  We did not debate over what was right or wrong, we just listened and related with each other.” In doing this, Stephanie allowed herself to be completely vulnerable. “With the show, I had no idea what I was doing. I hated how I looked and sounded on camera. I forced myself to move through the discomfort of knowing I was leaving a digital footprint of my mistakes behind me.” One of the ways she made friends with her discomforts was leaning fully into them. “I committed to a LIVE unedited show. There is way too much augmented reality in the world already. “So, what if things are not perfect, bad hair days are my norm and I still don’t entirely understand how to do my eye makeup…this is me loving myself through work in progress.”

Stephanie calls herself a relational nutritionist. She believes practicing relating should be a socially accepted activity in the same way we work out at a gym. “Having healthy relationships is a key to both our mental and physical health yet we take for granted that we know how to communicate and relate with people in a way that produces health benefits. I can’t help but wonder what our world would be like if more people decided to spend 60-90 minutes a day (typical body workout duration) practicing relating and communication skills. There would be less devastating isolation and more productive resolutions to arguments for sure. Can you imagine what it would be like if our politicians were required to take a course on relating or do a relating warm-up before hearings?”

Does Stephanie have what it takes to be the next big YouTube star? At 46, she knows she is not a typical influencer. She is talking about things that people take for granted. Popular themes on the show are: accepting learning as a natural order, promoting shared vulnerably and explorations of curiosity and context. “Inspiring people to make relating practices a part of their routine is what I feel called to do. Even if no one was watching, I would keep going. I am constantly thinking about new formats and ways to “gamify” relating. Social media has given everyone an opportunity to speak up and be seen which has allowed like-minded people to find each other. Groups have formed because of this. The next opportunity is to learn how to connect with people outside of our comfort zone and proudly proclaim the identity of RELATOR, creating a path to positive change where everyone’s voice is heard and accounted for.”

Stephanie also talks about “meme culture” and the need to reevaluate what it means to know, trust, and value someone. “How did Billy McFarland (Fyre Festival) and Elizabeth Holmes (Theranos) get as far as they did? They were just riding the waves of sensationalized hype that we can’t seem to get enough off. We devour provocative content like fast-food, 20 minutes later we want more, we are never satisfied or nourished. Real relational nourishment comes from quality relating, this is what we need to do offset the traumas in our news cycle that can make the most optimistic person feel hopeless.”

Will Stephanie be able to inspire people to change the way they are thinking about relational wellness? She believes many people are aware of how important it is to have healthy relationships, but they don’t know how to advance their relating skills and refuse to believe it is as simple as practicing active listening and asking better questions. “One of the most encouraging things that happened since I have been on my relating journey is Ellen DeGeneres naming her stand-up show Relatable. It is clear from watching her show that Ellen understands and appreciates context. She showed a different side of her personality that is not necessarily aligned with her kindness-all-the-time talk show persona. This persona felt very real, she is hilarious! She made you think about what it means to be relatable and connected to other people. She also made the word relatable trend on social media which helped my show be discoverable by new people. Thanks, Ellen!”

Stephanie Michele is a Certified Behavioral Analyst, Consumer Retention Specialist, Certified N.L.P. Practitioner and Founder of “No Text or Next.” Stephanie guides individuals and businesses into deeper explorations of the value of relationships and how to modify for peak performance and mutual benefits. She speaks on the importance of practicing communication exercises in the juxtaposition of mainstream “device, media and app-addicted” culture. Stephanie is a practical optimist and relational futurist who believes current relating norms are negatively impacting our present and future relationships yet the path to course correction is relatively simple with dedicated practice. She promotes an exploration of shared vulnerability, intuition and curiosity to increase the quality of relating in a constructive and meaningful way.