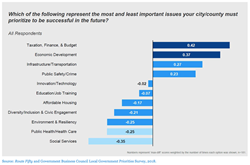 The survey, “Critical Priorities for Local Government: A Candid Survey of Local Government Officials and Agency Leaders,” was developed with input from The U.S. Conference of Mayors and underwritten by Amazon Web Services. It finds that local government officials believe public sector finances, economic development and infrastructure are key to the future success of their jurisdictions. Social programs and citizen-facing services / engagement ranked as low priorities among the study’s respondents.

“Our ‘Critical Priorities for Local Government’ survey helps us better understand the policy challenges local leaders feel they must address first when forced to choose among competing priorities,” said Mitch Herckis, Senior Editor and Director of Strategic Initiatives at Route Fifty. “It is clear that economic growth and financial stability are at the forefront of local leaders’ agenda.”

In determining rankings for each of the local government issues that was measured, GBC surveyed a random sample of 181 local government employees working in city and county agencies, including a large number of senior staff.

The study’s key findings include:

Concerns about the job market, economic growth and financial stability seem to be a priority for most leaders. Public servants at the local level responding to our survey consistently prioritized issues related to “Taxation, Finance, and Budget” and “Economic Development” as the most vital to the future success of their jurisdiction. Earlier this year, Route Fifty found that only 35 percent of state and local government employees believed that their partners at other levels of government provided predictable financial support for their mission.

In a time of increasing inequity, our survey results show less of a focus on prioritizing citizen-focused services among local government officials. Our respondents ranked “Social Services” last among 11 issue categories, with “Public Health/Health Care” and “Environment & Resiliency” also ranked as lower priorities for the future success of their jurisdiction. This comes at a time when Congress, the Trump administration and some states have looked at new requirements—and rollbacks—for key programs that help the neediest people.

Respondents to our survey continuously ranked “Innovation/Technology” as an issue that is almost completely neutral as a priority—not a high or low priority. This remained the case across all the demographic cross- sections we tested.

For the highlights and a link to the full results of the study, visit: https://www.routefifty.com/feature/gauging-leaders-assessing-critical-priorities-local-government/