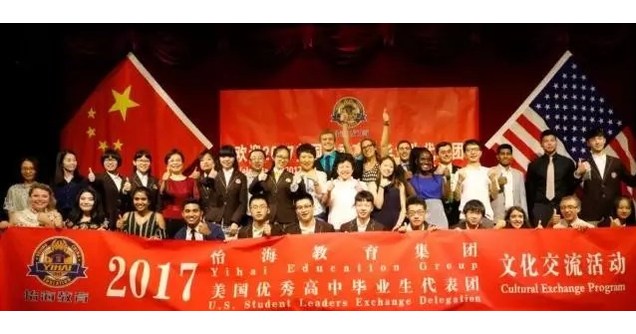 NEW YORK, Nov. 10, 2017 — China's President Xi Jinping and President Donald Trump met this week in Beijing to “foster a new type of international relations and build a community of shared future for mankind,” according to the Chinese Office of Foreign Ministry.

It was announced that the two countries would participate in corporate deals with a face value of $250 billion.  According to news reports, President Trump called Xi Jinping “a very special man” and praised the Chinese people for what they have achieved.  The two leaders pledged increased cooperation and have now developed a personal connection as they tackle problems such as trade and strengthened communications in Asia-Pacific affairs.

Linda Wong, Chairman of Yihai Group, believes strongly in fostering understanding between China and the United States and welcomed the news of the successful meetings between President Jinping and President Trump.

She believes that education is pivotal to future relationships and underwrites the Student Leaders Exchange Program, which is administered by the National Committee for United States-China Relations (NCUSCR). With Yihai's support for the past three years, the Student Leaders Exchange has sent exemplary high school students to China for a two week visit that includes meeting with their contemporaries, staying with host families and learning about Chinese history and culture.  “These students represent America's future leaders and we know that this exchange of ideas will strengthen their understanding of China and its people that is essential to the peaceful development of the world,” said Ms. Wong.  Since Yihai Group began supporting the program, 36 students from America have travelled to China.

From 2012 through 2014, Yihai Group has also supported the “Sino-US Teacher Exchange Program” where Chinese and American teachers learn about another country's education system along with its politics and economy.  They then bring this knowledge back to their own classroom and communities.

Ms. Wong has also donated $500,000 to the National Committee's 50th Anniversary Campaign in recognition of this group's vision for constructive U.S.-China relations, which are essential to the global community.  In total, Yihai Group has contributed more than $1.5 million in support of programs that foster understanding between the United States and China.

“The successful visit between President Jinping and President Trump is vitally important and Yihai Group is committed to strengthening the ties between these two great countries through programs that emphasis the importance of education to international understanding,” said Ms. Wong.

Under Linda Wong's leadership over the past 20 years, Yihai Property has developed major real estate projects in China. Ms. Wong is also a philanthropist, who has been recognized globally for her work with children and educators, the elderly and the arts.  Education is personally so important to her that she created a development model in her Chinese housing complexes that includes schools for the youngest members of a family and an elder college.