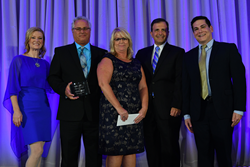 We are in the business of creating dream jobs for entrepreneurs, and as a franchisor, there is no higher honor than to be recognized by the International Franchise Association.

“We are in the business of creating dream jobs for entrepreneurs, and as a franchisor, there is no higher honor than to be recognized by the International Franchise Association,” said Debbie Fiorino, senior vice president of CruiseOne and Dream Vacations. “As a low-cost, home-based travel franchise, it is really something special to see our name share the spotlight with major household names in the franchise industry.”

The Franchisee of the Year award is an annual recognition for a select group of franchisees who have demonstrated excellence within the franchising community. Laurys Station, Pa. residents Richard & Cheryl Butz were recognized because they have grown from a home-based operation to one of CruiseOne’s most successful storefronts nationwide. Their strong work ethic, tenaciousness and persistence feed their success.

“I am so proud of Richard and Cheryl for how they have grown their business and become mentors to others within our franchise network,” noted Fiorino. “They are two of the most deserving people to receive this recognition.”

In conjunction with the IFA’s Franchise Education & Research Foundation, the Franchising Gives Back program was established by a generous donation from Roark Capital Group and it salutes the best, most innovative community leaders and charitable programs nationwide. Dream Vacations’ was one of five gold winners and was recognized in the “Support our Veterans” category for its Operation Vetrepreneur initiative, which has awarded 30 military veterans free franchises since 2012.

“Military veterans are a vital part of society and awarding veterans a free franchise is just one way we are able to give back to those who have done so much for our country,” added Fiorino. “This award truly solidifies our standing as the best franchise opportunity for veterans.”

The Franchise Action Network Annual Meeting in Washington, D.C. brings together more than 300 franchise business leaders to raise awareness with policymakers and other D.C. influencers about the industry’s continued success and economic contributions.

Existing travel agents, military veterans and those who are passionate about travel with an entrepreneurial spirit who are interested in starting a travel agency, should visit http://www.DreamVacationsFranchise.com or call 888-249-8235.

About the International Franchise Association
Celebrating 56 years of excellence, education and advocacy, the International Franchise Association is the world’s oldest and largest organization representing franchising worldwide. IFA works through its government relations and public policy, media relations and educational programs to protect, enhance and promote franchising and the more than 733,000 franchise establishments that support nearly 7.6 million direct jobs, $674.3 billion of economic output for the U.S. economy and 2.5 percent of the Gross Domestic Product (GDP). IFA members include franchise companies in over 300 different business format categories, individual franchisees and companies that support the industry in marketing, law, technology and business development.

About CruiseOne® / Dream Vacations
Ranked in the top three percent of all franchises worldwide and a member of the International Franchise Association, the home-based travel franchise CruiseOne® has been in operation since 1992, and its sister brand Dream Vacations launched in April 2016, giving franchisees a choice in how they want to brand their travel business. As part of World Travel Holdings, CruiseOne / Dream Vacations franchisees are given premium resources to plan and create a seamless vacation experience for the customer while offering the best value. CruiseOne has received partner of the year, a top-ranking status, by all the major cruise lines. For more information on CruiseOne / Dream Vacations, visit http://www.DreamVacationsFranchise.com. Like on Facebook at http://www.facebook.com/DreamVacationsFranchise, and follow on Twitter at @Dream_Franchise.