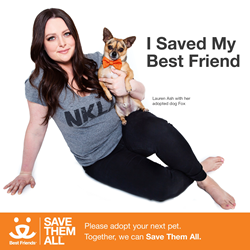 Adult and senior dogs have just as much love to give as younger ones and I encourage everyone to give an older dog a chance. I promise it will change your life in the best possible way.

As the NBC comedy “Superstore” revs up for its third season premiere on Sept, 28, star Lauren Ash can’t stop thinking about older dogs in shelters who deserve homes and would add so much to people’s lives if only given the chance.

On “Superstore,” Ash stars as Dina Fox, Cloud 9’s assistant store manager. Her previous credits include playing Hortense in season one of the Comedy Central series “Another Period,” which co-starred Natasha Leggero, Christina Hendricks, and Paget Brewster. She also co-starred as Rebel Wilson’s BFF Marika on ABC’s “Super Fun Night,” which won the People’s Choice Award for Best New Comedy Series in 2014. On the film side, Ash had a feature role opposite Kevin James in “Paul Blart: Mall Cop 2.” She is also featured in the 2017 SXSW hit “The Disaster Artist” performing opposite James Franco.

At home, Ash shares her life with her manfriend Umberto, her cat Sharky and a certain “experienced” little rescue dog named Fox.

“I adopted my dog Fox when he was 5 years old,” Ash said. “He had been in foster care for months and was passed over at countless adoption fairs before we met and fell in love. Let me be the first to say that Fox has enriched my life in every possible way. He’s the best companion I could have ever asked for. It breaks my heart thinking about all the older dogs at shelters just like Fox who get passed over in favor of puppies or younger dogs. It destroys me to know that dogs as wonderful and loving as my Fox can be euthanized because their age makes them less desirable to potential adopters. Adult and senior dogs have just as much love to give as younger ones and I encourage everyone to give an older dog a chance. I promise it will change your life in the best possible way. Together, we can Save Them All.”

According to national statistics, each day nearly 5,500 dogs and cats die in the nation’s shelters. Best Friends Animal Society has brought increased awareness to how people can get involved in the solution by adopting, spaying/neutering their pets, donating, volunteering and sharing this message with their friends.

About Best Friends Animal Society®
Best Friends Animal Society is the only national animal welfare organization dedicated to ending the killing of dogs and cats in America’s shelters. A leader in the no-kill movement, Best Friends runs lifesaving programs in partnership with more than 1,900 rescue groups and shelters across the country; regional centers in New York City, Los Angeles, Atlanta and Salt Lake City; and the nation’s largest no-kill sanctuary for companion animals. Founded in 1984, Best Friends has helped reduce the number of animals killed in shelters nationwide from 17 million per year to about two million. That means there are still nearly 5,500 dogs and cats killed every day in shelters, just because they don’t have safe places to call home. We are determined to get that number to zero by the year 2025. Working together with you, we will end the killing and Save Them All®. For more information, visit bestfriends.org.

Come Together Under the New Moon