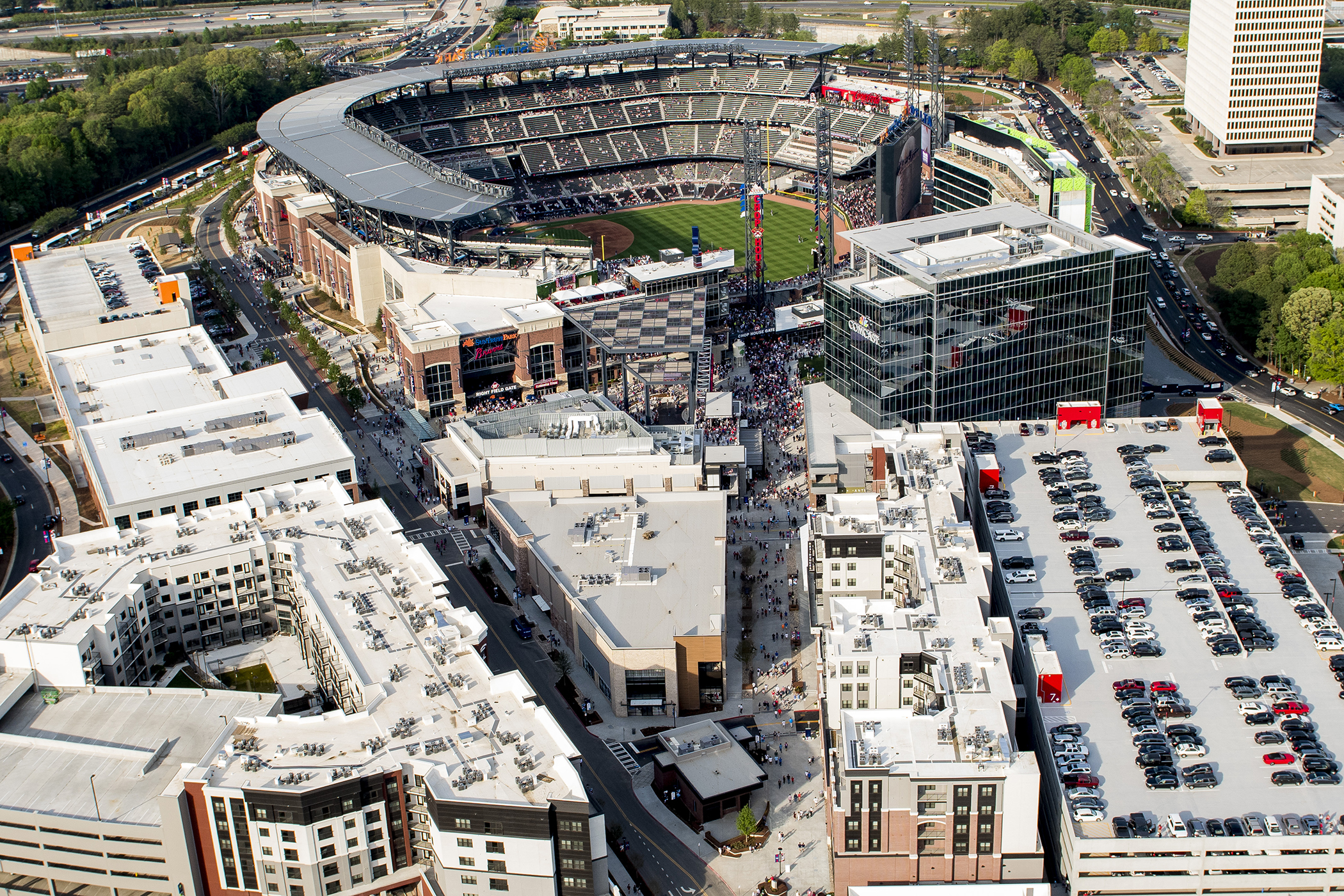 ATLANTA, September 18, 2018 – A study commissioned by the Cobb County Chamber of Commerce has determined that SunTrust Park and The Battery Atlanta are driving an average, total, net fiscal impact of approximately $18.9 million annually for Cobb County. Conducted by the Georgia Tech Center for Economic Development Research (CEDR), this is the first comprehensive fiscal impact study of the ballpark and adjacent mixed-use development, as well as the first analysis of the resulting Halo Effect in the surrounding area of influence.

In all, the analysis concluded that the average combined impact of SunTrust Park, The Battery Atlanta and the resulting Halo Effect to the people of Cobb County, through their government and schools, is $18.9 million per year. This includes $3.98 million to the Cobb County Government and $14.93 million annually to Cobb County Schools over the next 20 years.

“The Braves have delivered on their promise to reshape the economic destiny of Cobb County, and, in doing so, they’ve managed to create an entirely new, innovative way for municipalities and local governments to partner with sports franchises,” said Sharon Mason, president and CEO of the Cobb County Chamber of Commerce. “This report clearly and definitively shows what we already knew to be true, and that’s the public and private investments that led to SunTrust Park and The Battery Atlanta are paying off for the community.”

In building SunTrust Park and The Battery Atlanta concurrently, Cobb County and the Braves changed the traditional model for a public-private partnership. SunTrust Park was constructed as a partnership between the Cobb-Marietta Coliseum Authority and the Braves, with Cobb County contributing $300 million to the project and the Braves contributing $372 million. Separately, the Braves and their partners are investing more than $700 million into the mixed-use development, The Battery Atlanta, which was critical to Cobb County’s decision to contribute to the development of the ballpark. The Braves’ investment is having an immediate impact on the community’s bottom line. After less than two years of operation – including an opening season where The Battery Atlanta was only partially open – the study shows there already is a strong return on those investments.

In addition to the direct impact the projects are having on the community, CEDR experts were able to use a previously defined area of influence for the Cumberland CID to help gauge the Halo Effect SunTrust Park and The Battery Atlanta are having on the surrounding region. The research shows that property values in the area have soared by approximately $4.5 billion from 2013, when the ballpark was announced, to present day. These findings reinforce existing data showing the growth in the area, including $1 billion in planned development unrelated to the Braves in the Cumberland CID, 1,400 new rooms in six hotels in the area, and the construction or planning of six new Class A offices in the CID since the ballpark’s announcement.

CEDR analyzed the fiscal impact of SunTrust Park and The Battery Atlanta alone, and then analyzed the additional impact the project has had on the surrounding area through the Halo Effect. Key takeaways include:

“We wanted to answer a key question in this fiscal impact analysis – would the level of guaranteed private investment in The Battery Atlanta change the calculus for the public financing of SunTrust Park?” said Dr. Alfie Meek, the executive director of CEDR. “Our report demonstrates that the answer to that is ‘yes.’ The models we used and the assumptions we made were conservative, but the results were clear as, from a purely fiscal standpoint, Cobb County is better off because of SunTrust Park and The Battery Atlanta.”

As one of the most influential business advocacy organizations in Georgia and one of the top three chambers in the nation, the Cobb Chamber is the only organization in Cobb County dedicated to bringing the community and its leaders together to create jobs and strengthen the economy and quality of life so businesses and the community can achieve more. The Chamber achieves this by creating jobs and driving economic development; strengthening the community and the region; growing member businesses and nurturing leadership; and connecting businesses, government and the community.

The Center for Economic Development Research is a unit of the Enterprise Innovation Institute, Georgia Tech’s chief business outreach and economic development organization. Its core mission is to help business, industry, entrepreneurs, and economic developers across Georgia grow and remain competitive.