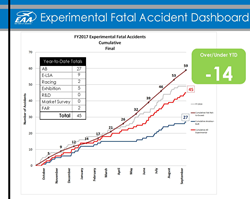 The 2017 total of fatal accidents in Experimental category aircraft shows a continuing trend of safety improvement beyond FAA not-to-exceed goals.

The overall fatal accident numbers remain much lower than other recreational pursuits, such as paddle sports, skiing and snowboarding, and driving all-terrain vehicles.

In addition, fatal accident totals for the experimental category overall, including racing aircraft, those used for exhibit only, research-and-development, and some types of light-sport aircraft, dropped as well. Total fatal accidents fell from 49 to 45 during the 12-month measurement period ending September 30, 2017. The final figures are nearly 25 percent below the FAA’s “not-to-exceed” goal of 59 fatal accidents for that period.

“These are historic lows for fatal accident in amateur-built aircraft and this continuing trend is a credit to everyone who is focusing on safety,” said Sean Elliott, vice president of Advocacy and Safety for the Experimental Aircraft Association (EAA), who highlighted these figures at the FAA General Aviation Safety Summit in late October. “The overall fatal accident numbers remain much lower than other recreational pursuits, such as paddle sports, skiing and snowboarding, and driving all-terrain vehicles. Statistics even show that being involved in a fatal amateur-built aircraft accident is less likely than being killed in a lightning strike incident.”

EAA has worked closely with the FAA and the National Transportation Safety Board on recommendations to reduce fatal accidents, including through participation in the FAA General Aviation Joint Steering Committee that EAA co-chairs. The EAA focus has also included the Founder’s Innovation Prize competition that seeks innovations to reduce loss-of-control accidents in amateur-built aircraft; a focus on transition and recurrent training; and use of an additional safety pilot during initial flight testing in amateur-built aircraft.

“These efforts build upon EAA’s longstanding Technical Counselor and Flight Advisor programs, and additional safety materials available through EAA’s flagship Sport Aviation magazine,” Elliott said. “Further reducing the accident totals is a continuing challenge, but one that is foremost as part of EAA’s mission to grow participation in aviation.”

About EAA
EAA embodies the spirit of aviation through the world’s most engaged community of aviation enthusiasts. EAA’s 200,000 members and 1,000 local chapters enjoy the fun and camaraderie of sharing their passion for flying, building and restoring recreational aircraft. For more information on EAA and its programs, call 800-JOIN-EAA (800-564-6322) or go to http://www.eaa.org. For continual news updates, connect with http://www.twitter.com/EAA.