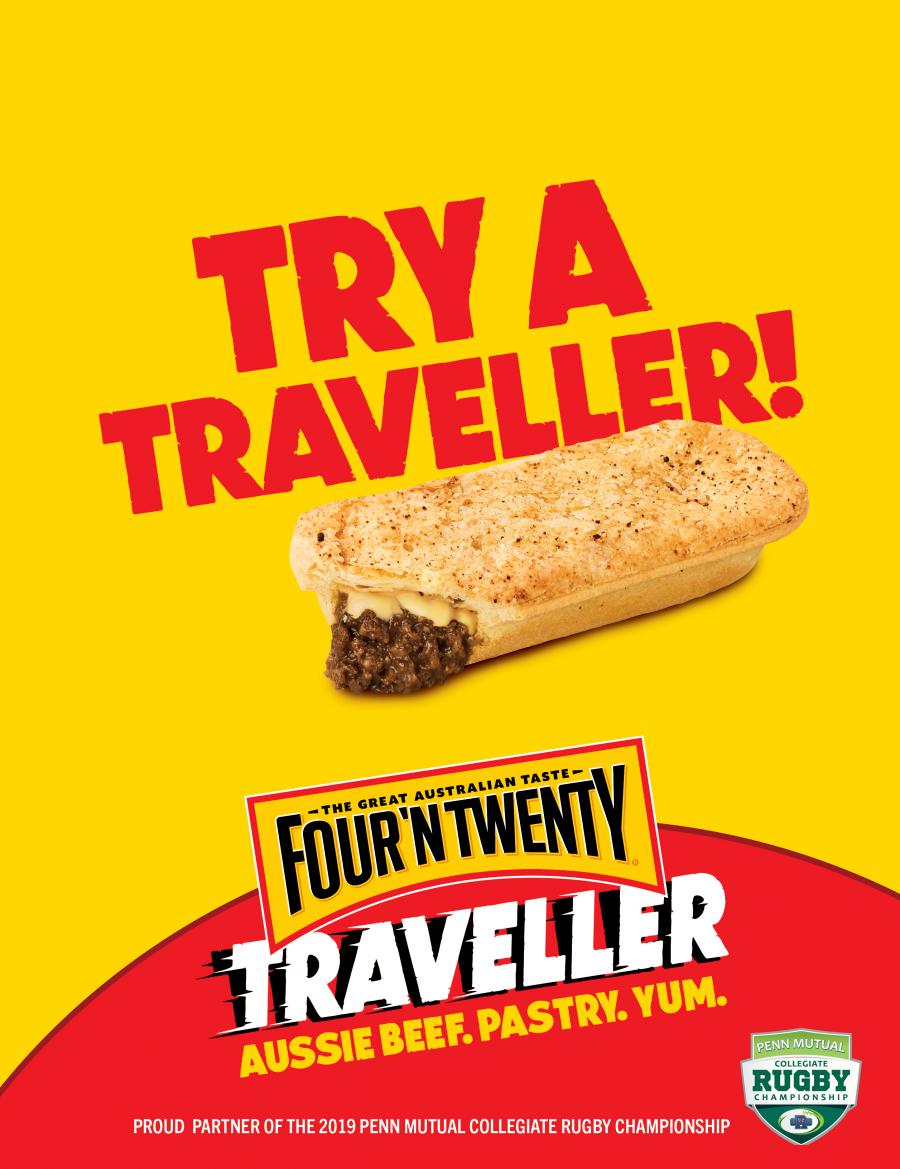 Four'N Twenty Wants YOU to TRY A TRAVELLER

The Four’N Twenty Traveller is real food for real fans. It’s authentic, no-frills and made for people who truly enjoy the love of the game – which describes Rugby fans perfectly”

NEW YORK CITY, NY, UNITED STATES, May 24, 2019 /EINPresswire.com/ — It was announced today that Four’N Twenty, The Great Australian Taste, will bring its latest product, the Four’N Twenty Traveller, made with 100% Australian Beef, to the Penn Mutual Collegiate Rugby Championships at Talen Energy Stadium in Philadelphia, June 1st and 2nd, 2019. The event will be broadcast on ESPN.

This comes off the very successful US launch of the Four’N Twenty Traveller earlier this year at Australian Heritage Night presented by Four’N Twenty, at The Center in partnership with the Philadelphia 76ers on Thursday, February 21, 2019.

The Four’N Twenty Traveller is an oblong-shaped pastry made with 100% Australian Beef, served hot, right out of the oven. Four’N Twenty products have been Australia’s original fan food for over 70 years and are synonymous with sports there. The Four’N Twenty Traveller savory snack is deliciously crafted to perfection and made to fit right in your hand. And it’s real food, made with 100% Australian Beef cooked in a rich, savory gravy, seasoned perfectly to enhance the delicious flavor of the beef and wrapped in golden flaky pastry. It’s a real Win-Win.

The Four’N Twenty Traveller will be available in two delicious flavors – Classic Beef and Beef & Cheese. As a sponsor, Four’N Twenty is unveiling its very first Food Truck in the US at the Festival Garden on the grounds of the stadium. In addition, the brand will host activities including a sampling tent and lawn games for the fans to enjoy.

Four’N Twenty has long been indelibly linked to sports in Australia. Last year, the brand inked a deal with the NSW Rugby Union in Australia as their official referee partner. Which had a special added benefit as Four’N Twenty CEO Paul Hitchcock is a part-time Rugby Union referee himself.

In the US, the brand has adopted Philadelphia as their home city. “We love being part of the Philadelphia sports culture,” states Stuart Smyth, GM of International, “We’ve had a great introduction through our partnership with the 76ers and now we are so proud to have the opportunity to support the collegiate Rugby community, as it’s a sport that is so much a part of our culture as well. The Four’N Twenty Traveller is real food for real fans. It’s authentic, no-frills and made for people who truly enjoy the love of the game – which describes Rugby fans perfectly.”

You can Try A Traveller at concession stands within Talen Energy Stadium throughout the event, on Saturday, June 1st and Sunday, June 2nd.

In the coming months, Four’N Twenty Travellers will be available in select convenience stores, retail locations and stadiums across Pennsylvania.

The Four’N Twenty legend began in 1947, in a country town in Australia, when a crafty café owner named LT McClure hung out a sign encouraging customers to peer through a window and watch “the most delicious meat pies being made.”

It didn’t take long for these pies to become a national phenomenon. By 1956, thousands of these warm, flaky treats were being churned out by the hour and delivered to hungry, happy mates. Aussies became hooked on this new taste sensation as Four’N Twenty showed up in towns and cities across the nation.

But there was one destination that really stood out, a place that kept the orders coming, season after season: Football

Four’N Twenty pies became synonymous with being the “fan food” and the ritual of the game. In stadiums all across the country, you’d find tens of thousands of fans with a beer in one hand and a Four’N Twenty in the other.

Today, Four’N Twenty is a part of Australian culture and a national icon.