ARIDO Fine Art jewelry created with the highest quality gems and precious metals in the world. 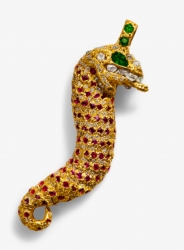 Manhattan, NY, August 19, 2018 — Toronto International Film Festival (TIFF) is one of the largest publicly attended film festivals in the world.

Founded in 1976, TIFF is now one of the largest and most prestigious events of its kind.

The event will take place during TIFF in Toronto September 16th, 2018.