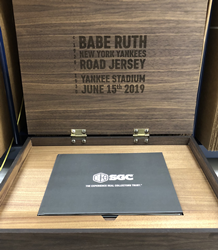 We believe that the new world record set by this remarkable Babe Ruth jersey speaks not only to the quality and objectivity of our work, but also to the trust collectors worldwide have in the SGC brand.

Top card grading and game-worn uniform authentication service SGC is pleased to announce that the Babe Ruth game-worn late 1920s Yankees jersey that the company authenticated has just sold for a whopping $5,640,000, setting the new world record as the highest-priced piece of sports memorabilia ever sold publicly.

Prior to being auctioned at a live event at Yankee Stadium on June 15, 2019, which was organized by Hunt Auctions, the ultra-rare jersey had been carefully examined and authenticated by SGC’s Dave Grob, the world’s top authenticator of vintage Major League Baseball uniforms.

Largely considered to be the only person qualified to make judgments on such valuable items, Grob is also the expert behind the authentication of the previous highest-priced record-holder – a 1920 Babe Ruth road jersey that sold for $4,415,658 in 2012.

“The entire team at SGC is honored to be part of this historic event, and we are proud to be consistently chosen as the company to authenticate the hobby’s most treasured items,” said SGC CEO Dave Forman. “We believe that the new world record set by this remarkable Babe Ruth jersey speaks not only to the quality and objectivity of our work, but also to the trust collectors worldwide have in the SGC brand.”

Featuring more than 400 items relating to the life and career of the legendary player, the live auction attracted historians, collectors, and investors from around the world prompting vigorous bidding on many high-profile pieces. Many of the items were part of the Ruth family collection, which had been largely unknown to the general public, while the jersey itself belonged to a private collector who wishes to remain anonymous.

Established in 1998, SGC is one of the most trusted card grading and game-worn uniform authentication companies for collectors worldwide. Comprised of experienced and respected graders and authenticators, SGC sets the industry standard with the consistency, integrity, and quality of its services. With a host of tech updates in progress, SGC customers will enjoy an array of unique collector support and security features, including an interactive submission platform with order tracking, grader notes, a rich database of all items ever graded by the company, high-quality card and uniform images, and much more. To learn more about SGC and its grading and authentication services visit http://www.gosgc.com, like the SGC Facebook page, and follow the company Instagram account @sgcgrading.