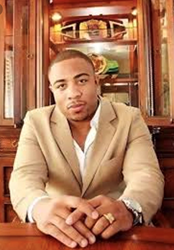 Cleveland’s own light heavyweight champion Ron “The American Dream” Johnson has been a boxing fan all of his life. His uncle Ronald, whom he was named after, was a professional fighter and died in the ring before Ron was born. He would attend an older cousin's boxing matches, and that was one of the deciding factors for Ron Johnson to jump-start his career at the age of seven. As an amateur, Ron Johnson dominated his opponents in the ring with 110 wins. In 2001 Ron placed first, winning a gold medal at the Pan American games in Santa Fe, Argentina. At the age of seventeen he was discovered by boxer Laila Ali, the daughter of the great Muhammad Ali. At nineteen years old, he signed with NRAGE, a management company based in Philadelphia and started training with Floyd Mayweather Sr. His professional debut was on the same card as Winky Wright and Shane Mosely, in Las Vegas at the Mandalay Bay Casino and Resort. In his first match he scored a fourth round TKO. He went on to win nine more consecutive fights. In 2006 Ron Johnson became a free agent and signed a five year, seven figure deal with a Houston based management firm called Kennyboy. Boxing Legend Oscar De La Hoya and legendary promoter Don King, offered to sign him, and both offered substantial amounts of money, but Ron was happy with Kennyboy Management Company. Shortly thereafter, Ron had an opportunity to sign a multi-year deal with promoter Murad Muhammad, who promoted Roy Jones Jr. and Evander Holyfield. This deal was worth millions to Ron Johnson, but he wasn’t sure if it was the right career move for him as he wanted to take control of his own career. Once he made his decision, he quickly enlisted help from a friend and set out to gain control by finding investors for his next fight. After investors saw him fight and witnessed a third round knockout against Aaron Norwood, they promptly provid capital to promote his next fight. This was the turning point for Johnson and a dream come true. Johnson said, “It’s my biggest accomplishment to date!” Mr. Johnson promoted his own fight on October 6, 2007, and he became the WBF light heavyweight Champion. Ron Johnson and football legend Jim Brown then started the foundation “Put down the guns, Pick up the gloves,” to help steer teens in the right direction in order to stop senseless violence. Since then, Mr. Johnson’s foundation has provided three homes to deserving families and has supported many programs dealing with at risk troubled teens. This foundation is joining with http://www.teenlawschool.com to teach teens that when kids break the law unintentionally or even accidentally, the consequences can leave emotional, financial and legal scars that can last a lifetime.

Boink Live Streaming Corp., a Delaware corporation, formed for creating a social media platform based on broadcasting and watching people live streaming. In addition to Scottsdale Arizona headquarters, additional locations are in the Philippines, Indonesia, the United Kingdom, the Ukraine, Romania, United Arab Emirates, Hong Kong and New York City. Our application was programmed by our technical partner iMagically, with production builders for the app in the Ukraine by IDAP Group, Castle Productions in Indonesia. The beta version is currently available on Google ITunes store, Apple store, and works on all Android and Apple phones. We have created a free to download mobile application that allows our users to watch and broadcast live streaming videos while earning rewards and cash. With one click our users will be able to go live, broadcast themselves, meet new people, connect with their favorite celebrities and gain followers, all by sharing their moments, lifestyle and attitude. Our application features live streaming and chat, so our users may stream videos and use our live chat to comment and talk during the live stream. Stickers stay on the face while broadcasting; and live filters and make up effects liven up the streaming video they are broadcasting. The application also includes live feed search using hashtags that allow users to find videos and broadcasters aligned to their interests, hobbies and personalities. The Bonklive Live stream can be shared through other popular social media platforms such as Facebook, Twitter, Instagram and Snapchat to gain followers. The application will allow its users to send gifts to their favorite broadcasters. These gifts can be turned into gold bars which can be redeemed for national currencies. Boink will capitalize on the growing entertainment market across the world through the production and promotion of high quality streaming entertainment. Boink Live Streaming Corp., 16427 N. Scottsdale Road, Suite 410, Scottsdale, Arizona 85254, telephone 480-758-8585.