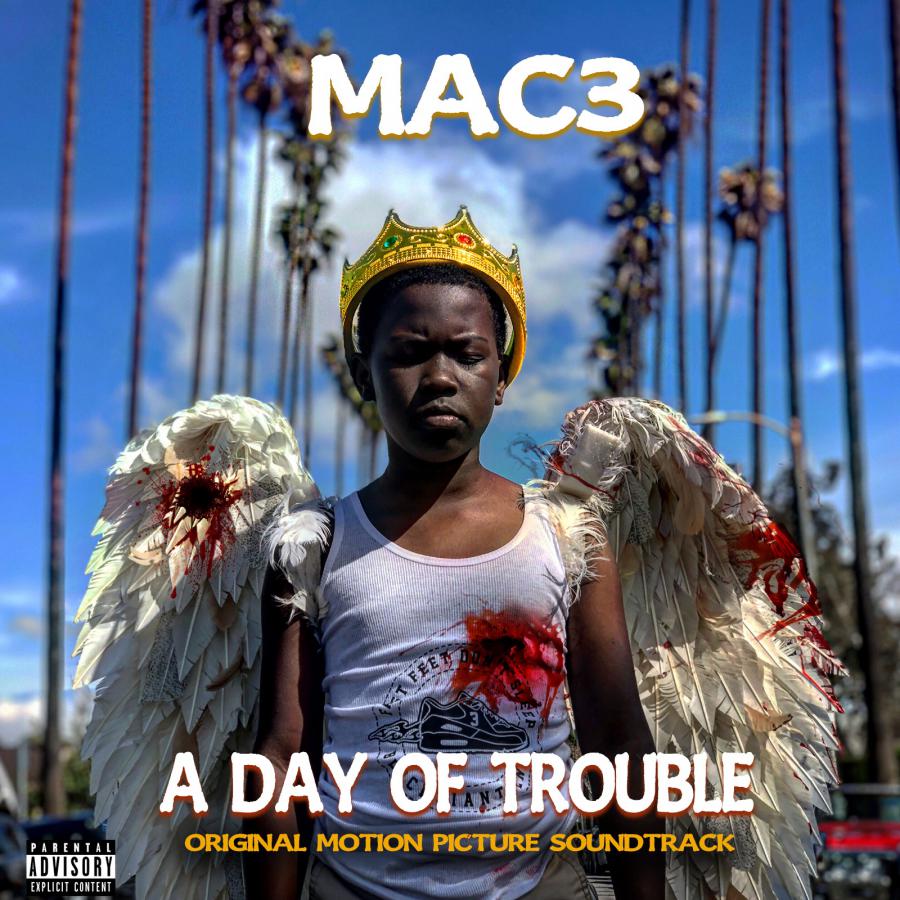 Rap Artist MAC3 “A Day of Trouble” title song for the Marc Cayce feature film is about a kid, living in an environment filled with gun violence, gangs and crime, who rises above his circumstances and becomes a productive man. The artwork was designed by toinggraphicss.

As the executive producer on the film, I wanted an authentic voice to restate “A Day of Trouble” story line. MAC3 wrote the perfect lyrics that captivates the title song for this film.”

The film written and directed by Cayce tells a gripping urban story about a day in the life of two Los Angeles-based rival gang members: Crip and Blood, who are first cousins. Curtis, an unreformed ex-inmate who was recently released from jail, ask Terrance to drive him to a job interview but they stop at the bank. Unbeknownst to Terrance, Curtis intends to rob the bank. In a panic, Terrance and Curtis quickly leave the scene of the crime with no plan. The events that unfold change the course of their future and the lives of two innocent hostages. “This film is more prevalent today because of the continuing senseless killing in urban communities across the Nation involving gangs, territory and hopelessness,” said Cayce. “I wanted to tell a story about how dangerous it is when you are in the wrong place at the wrong time and when desperation takes over. People have to end the vicious cycle of violence, think before reacting and find a Plan B, a better, alternative solution.”

“As the executive producer on the film, I wanted an authentic voice to restate “A Day of Trouble” story line. MAC3 wrote the perfect lyrics that captivates the title song for this film,” said Shacola Thompson who also executive produced the music video. “I felt the importance of showcasing guns and gangs violence which is prevalent in society today. MAC3 is my cousin but his flow is unique and his delivery is appealing. I collaborated with Ev Salomon who directed the music video and made my vision come to life.”

Thompson says, “The concept behind the album cover art is inspired by the music video about a kid, living in an environment filled with gun violence, gangs and crime who ultimately, rises above his circumstances and becomes a productive man in today's society.”

The songwriter is rapper Vincent Oglesby aka MAC3. “I was born and raised in Dos Palos, a city in Merced County,California,” said Mac3. “My goal was to play football baseball but a car accident took away my dream.” His inability to excel as an athlete, cost him his scholarship. “I started doing what I had to do to survive and overcome the obstacles that I was dealt so I redefined myself,” he said. “I took the street name of MAC and in memory of my past dreams and added the number 3 which was the number I always wore when I played sports, and MAC3 was born.”

His new identity led him to take his hobby of rapping to a professional level. “Rapping was a way to express myself and let out the struggles I was going through internally,” said MAC3. “Rapping became more serious and I found ways to improve my talent by writing from the heart about my real life and recording my lyrics in my home studio.”

MAC3 intends to use his talents to illustrate that success is possible in spite of life's trials and tribulations you may endured. “Never give up, go hard for whatever you have a passion for,” he said.

The title song A Day of Trouble is available on Amazon.

To request an interview with MAC3, Shacola Thompson, Marc Cayce or any of the cast members, contact Platinu Star Public Relations at [email protected]

Social media links to follow A Day of Trouble: