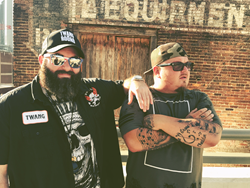 Country Duo Twang and Round

Kentucky based country music duo Twang and Round have announced the dates for their upcoming headlining tour throughout October. The group will hit the road in support of their recently released new studio album “Way I Was Raised”, which was released via Thirteen Skulls Entertainment. Twang and Round will be crisscrossing the country performing their unique brand of AmeriFlow for fans, including a performance at the Chillin on the Lucie Country Music Festival.

Twang and Round's “Way I Was Raised” seamlessly shifts between musical genres; Twang and Round make it look easy. The group delivers veteran raps on “La Di Da Di” as they pay homage to hip-hop icon Slick Rick. Twang and Round shift on “Dope Boy” and deliver a more sweet acoustics sound. Meanwhile, you find yourself dreaming about riding shotgun down back roads, with the moonshine rhymes of “Lovin' Liquor” spitting like a machine gun attack. As the southern guitar licks of “Devil To Pay” invade your eardrums, fans will stomp their feet and throw up the horns like an arena rock show. Twang and Round's “Way I Was Raised” is the soundtrack of the AmeriFlow lifestyle and the fans who love to have fun, share a couple of drinks, and roll through the heartland with the windows rolled down. “Way I Was Raised” combines intense rhymes, backwoods bravado, a little moonshine and American pride. The mixture comes together in the melting pot coined 'AmeriFlow!'

Coloring outside the lines of any genre-specific formula takes courage, Twang and Round's musical palette is much more refined, which allows them to speak the AmeriFlow genre. The group can go from blasting the likes of Creedence Clearwater, The Black Crowes, and Lynyrd Skynyrd one minute, to seamlessly mixing in UGK, OutKast, and Beastie Boys the next. All of these elements come together to give Twang and Round an authentic signature sound that bridges the gaps between country and hip-hop.