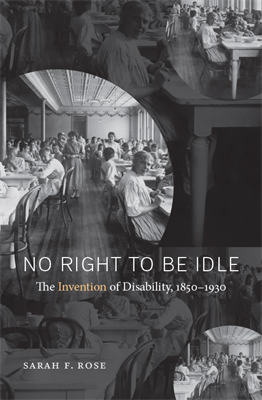 The state of New York honored Sarah Rose, associate professor of history and director of UTA’s disability studies minor, for excellence in using state archives for an extensive research project which led to the publication of her book, “No Right to Be Idle: The Invention of Disability, 1840s–1930s.”

The New York State Archives and the Archives Partnership Trust awarded Rose with the 2017 Award for Excellence in Research Using the Holdings of the State Archives for her use of the state archives in a creative and insightful way which contributed to a greater understanding of a topic.

“While I used records from a wide array of archives and libraries, the New York State Archives was the most dominant resource because those archives have an incredibly rich set of disability history records, including records for the first and arguably most influential American asylum,” Rose explained. “I also relied on records from Ford Motor Company since, unlike virtually every other major employer, Henry Ford hired thousands of workers with disabilities.”

According to Rose’s book, in the early 20th century, people with all sorts of disabilities came to be labeled as “unproductive citizens” by employers and lawmakers alike, even though most were working. Rose said that fear that still drives U.S. disability policy today.

“Today, approximately 70 percent of people with disabilities are unemployed, due in large part to discrimination and persistent barriers. Ensuring that students with disabilities graduate from college is one of the best ways to prevent unemployment and poverty, but many don’t graduate,” she added.

UTA is one of the nation’s leading institutions in helping students with disabilities gain access to educational opportunities. UTA was home to one of the country’s first organizations for students with disabilities and was the first university in the United States to offer full-ride scholarships for athletes in adapted sports. Currently, UTA boasts to two pre-eminent wheelchair basketball teams.

Rose directs UTA’s disability studies minor, the first such program in the south and one of only about 30 in the nation. Rose is currently advising institutions such as Yale University and The University of Texas at Austin as they consider establishing similar programs.

“Rosie and I congratulate UTA for its historic impact in this important field,” said Mike Moncrief, former County Judge, Texas state senator, state representative and Fort Worth Mayor. “Dr. Rose is a true leader in disability studies. Her research shows us that investing in accessibility can make dreams of going to college and employment not only achievable goals, but a reality.”

Currently, 70 students from more than 20 departments and majors are enrolled in UTA’s disability studies minor. Participants are required to complete a 120-hour internship with a community partner and complete a capstone essay. Students intern in fields such as universal design, independent living, accessibility policy, disability rights law, disability history, and adapted sports. Student interns are making a clear impact. For example, one intern created procedures for identifying and paging deaf patients after discovering a deaf woman had been in labor for several hours in an emergency waiting room. She also convinced hospitals in Arlington to expand access to American Sign Language interpretation.

Of the 22 students who have already graduated from the minor, nine are employed in fields such as autism education, adapted sports, accessible technology, disability-related research, special education, and rehabilitation. The others are either enrolled in or applying to graduate school.

“More than 60 percent of the students in the program have disabilities themselves. Their success shows how an accessible campus as well as mentoring, internships and links to the community can expand opportunities for the 20 percent of Americans who have disabilities,” Rose said.

Rose and Trevor Engel, the disability studies adviser and a 2016 graduate of the minor, jointly curated the “Building a Barrier-Free Campus” exhibit recently on display at the Texas State Capitol, The University of Texas at Austin’s Perry-Casteñeda Library and at the Lex Frieden Employment Awards hosted by Texas Gov. Greg Abbott. The exhibit also is accessible in digital format .

In 2016, UTA Libraries debuted the Texas Disability History Collection website , which features digitized documents, videos, images and oral histories from the Libraries’ groundbreaking collection, which was the first in the Southwest. The website was funded through a grant from the Institute of Museum and Library Services to the Texas State Library and Archives Commission and received the Society of American Archivists’ Diversity Award for 2017.

In a statement proclaiming October Persons with Disabilities History and Awareness Month, the Governor’s Committee on People with Disabilities released a statement recognizing UTA’s significant contributions to the field of disability studies. “There is no better place to learn about the story of Texas and Texans with disabilities’ role in our state’s rich history than The University of Texas at Arlington,” the statement said.