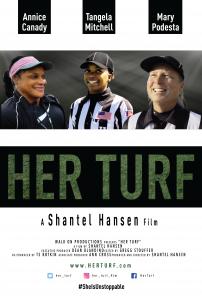 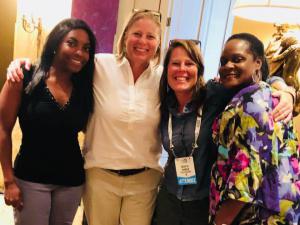 Director/Producer Shantel Hansen and the cast of HER TURF

The recognition Her Turf received from SeriesFest, as well as all the Film Festivals to date, offers audiences an opportunity to hear the untold story of three remarkable female football officials.”

“Attending SeriesFest was an incredible experience. It’s truly an honor to receive the Best Digital Short Series & Independent Pilot/Unscripted award for Her Turf,” stated Shantel Hansen, Colorado-based director, and producer. “Looking back, I feel profoundly fortunate to have captured the journey of these incredible women football officials on and off the field. I didn’t have a big network backing my project or prestigious awards under my belt as a first time director and producer, and SeriesFest still took a chance on me. I will forever be grateful for this experience and a chance to share the stories of three pioneering women with the world.”

According to Executive Producer Dean Blandino, “The recognition Her Turf received from SeriesFest, as well as all the Film Festivals to date, offers audiences an opportunity to hear the untold story of three remarkable female football officials on and off the football field for the first time. Her Turf captures what it takes to be an official because every snap is an audition. On behalf of the film, I would like to thank the jury for this prestigious award.”

The timely and engaging film features Annice Canady, Tangela Mitchell, and Mary Podesta. Annice Canady from Ft. Lauderdale, Florida started officiating football in 1990 at the youth level. After battling cancer three times, she made her collegiate debut officiating for the NCAA in 2001. In 2002, Canady was the first female official to work an NCAA Division I football game on August 31, 2002.

These three women reveal the struggles and triumphs of excelling in traditionally male-dominated roles. By their very presence, these women are opening doors for those who will arrive after them. Her Turf is a timely and potent documentary, which follows three pioneering female football officials as they boldly attempt to level the playing field. As these officials change preconceived ideas about women excelling in a traditionally male role, this film will spark more in-depth conversations about gender representation in team sports.