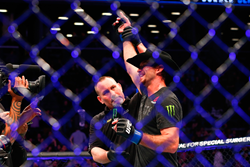 It feels good being back at 155. The old man's still got it. I wanted to let them know Cowboy's back – Donald Cerrone

Monster Energy congratulates Donald “Cowboy” Cerrone on his win against Alexander Hernandez via a second round TKO stoppage at UFC Fight Night 143 inside Barclays Center in Brooklyn, New York featured on the debut of ESPN+ 1.

Not only did Cerrone improve his record of the most wins in UFC history, but he also made sure UFC’s unveiling on ESPN got off to a great start with his dominant performance. In front of a rowdy crowd Cerrone devoured the highly hyped-up young talent, Hernandez with a series of brutal blows over two rounds earning his 16th career finish. For this fight Cerrone returned to the lightweight division (his original fighting weight division) after testing welterweight, which didn’t work out as good for him after he lost five of the 10 fights he fought at welterweight.

For the first round Hernandez started of strong landing a big uppercut, but Cerrone shook it off, settled in and never looked back punishing Hernandez with jabs, a few brutal elbows and finished him with a nasty head kick that put Hernandez down. Then more punches from Cerrone forced the referee to step in for the second-round TKO stoppage.

Cerrone’s lightweight victory comes on the heels of his feat in November where he impressively finished Mike Perry in the first round with a vicious armbar in the welterweight division.

“It feels good being back at 155. The old man's still got it. I wanted to let them know Cowboy's back,” Cerrone said. “When I left, I was ranked No. 2. Now, I come out and I'm in the blue corner. I haven't walked out in the blue corner in years. I even told myself in the cage, 'You're in the corner, that's so weird.' I have to start it again and crawl my way through the fire.”

What’s next for Cerrone? Cowboy and UFC fans have been asking for a fight between McGregor and Cerrone, and finally it seems like this fight might materialize after all. For the first time, McGregor responded to Cowboy’s call out through a tweet saying, “For a fight like that Donald, I’ll fight you.”

About Monster Energy:
Based in Corona, California, Monster Energy is the leading marketer and distributor of energy drinks and alternative beverages. Refusing to acknowledge the traditional, Monster Energy supports the scene and sport. Whether motocross, off-road, NASCAR, MMA, BMX, surf, snowboard, ski, skateboard, or the rock and roll lifestyle, Monster Energy is a brand that believes in authenticity and the core of what its sports, athletes and musicians represent. More than a drink, it’s the way of life lived by athletes, sports, bands, believers and fans. See more about Monster Energy including all of its drinks at http://www.monsterenergy.com.