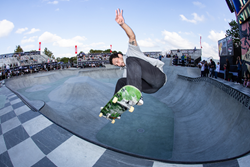 The world’s best park terrain skateboarders convened at legendary Kroksbäck Skatepark in Malmö, Sweden, last weekend to compete in the Vans Park Series (VPS), the official world championships of park skateboarding. Starting things off, Thursday saw more than 75 competitors battle for podium spots in the Europa Continental Championships as the direct gateway to the VPS World Championships in China this coming October.

When all was said and done, Monster Energy team riders Sam Beckett from the United Kingdom and Rune Glifberg from Denmark claimed third and fourth place in the high-profile competition, respectively. Now in its third year at Kroksbäck Skatepark, the Vans Park Series with its overall purse in excess of $700,000 is the ultimate test of park skating skills – and Beckett and Glifberg brought the heat to Malmö.

Known for taking technical street tricks into the vertical realm, 26-year-old Beckett from Norfolk, UK, unleashed a deep bag of tricks on the Kroksbäck park. Standouts included huge crossbone air and frontside ollie blunt in the deep end, frontside lipslide over the love seat, frontside 5-0 grind off the pool block extension into the spine pocket, backside 360 ollie in the deep end, as well as fast plant and ollie out to backside disaster pull-in on the tomb stone, and backside 360 air over the pyramid for 69.06 points and a strong third place finish.

As an internationally acclaimed vertical and park terrain skateboarder since the 1990s, Glifberg worked the winding Kroksbäck Skatepark’s mixture of vert elements, wallrides and bowl corners with signature speed and precision. Frontside crailslide and huge frontside nosebone airs in the deep end, frontside lipslide up and across the pool block extension from the spine pocket, ollie out to frontside smith on the tomb stone, frontside tailslide on the bank and huge Madonna’s won the resident of Copenhagen, Denmark, a 67.04 score and fourth place.

Beckett’s and Glifberg’s Monster Energy teammate Trey Wood also brought his A-game to Malmö this weekend. Fresh off his 18th birthday, Wood is competing in the 2018 Vans Park Series Pro Tour as a Tour Pro Challenger. This means hard work: instead of fast-tracking into the semifinals like invited Select Pros on the tour, Wood had to battle through Friday’s grueling prelims – from which he emerged in second place – and fight for a spot in Sunday’s finals.

Having reached the final eight, Wood looked like a solid contender for a podium spot with stacked runs including kickflip frontside stalefish in the deep end, huge Indy air transfer into the bowl section, kickflip lien into the bank, frontside lipslide transfers up the escalator, 360 Indy over the pyramid, and huge backside 540s in the deep end. But before he could clinch that perfect run, Trey suffered a slam and hit his head in the finals, settling for seventh place, but remained unhurt and without a concussion.

As a silver lining, Wood’s hard work on this year’s VPS Pro Tour is paying off: His Malmö score propelled him into second place on the 2018 Tour Pro Challengers rankings at 21,600 points, securing an invite to the VPS World Championships in China this Fall.

With a World Championship title in the cards, it’s already safe to say that Wood, who recently relocated to Southern California from his native Arizona, is having the best season of his young career: He started 2018 by winning the concrete bowl contest at Tampa Pro in March and claimed a surprise bronze medal in Big Air at X Games Minneapolis in July. Watch out for Wood, he is on a roll right now!