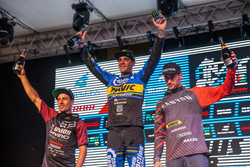 It was a bit stressful to come in with a big points lead because you just don’t want to mess things up. I’m pumped on it. It’s awesome to have my whole team and family here and try and keep the dream alive and keep winning – Sam Hill

The Australian mountain bike legend, returned to Finale Ligure, Italy this weekend on the Italian Riviera for the final round of the 2018 enduro season with a substantial leads in points, but he had a rival who was charging hard in an attempt to snatch the title away in the last round.

This week’s event consisted of four stages and one day of racing over a distance of 50km with 1800m of climbing. Italian fans are rabid for enduro and lined the tracks from top to bottom all day, despite the blazing sun and scorching temperatures, making for an exciting day of racing for all of the marbles.

Hill didn’t need to win to take home the title, but needed to finish to seal the deal, and as such let off of the gas a little after a mechanical last weekend in Spain delayed the title fight until this weekend. While not his most dominating performance of the season, a comfortable ninth-place finish safely put Hill in the number one overall spot for the season and the champagne began to flow. In total, the Aussie took home four event wins this season, and almost a dozen stage wins in defense of his 2017 championship title.

“This feels awesome; a bit of a relief to seal the deal today, said Hill.” It was a bit stressful to come in with a big points lead because you just don’t want to mess things up. I’m pumped on it. It’s awesome to have my whole team and family here and try and keep the dream alive and keep winning.

Monster Energy’s Mitch Ropelato (USA) finished 19th on the day and 20th overall for the season.

About Monster Energy: Based in Corona, California, Monster Energy is the leading marketer and distributor of energy drinks and alternative beverages. Refusing to acknowledge the traditional, Monster Energy supports the scene and sport. Whether motocross, off-road, NASCAR, MMA, BMX, surf, snowboard, ski, skateboard, or the rock and roll lifestyle, Monster Energy is a brand that believes in authenticity and the core of what its sports, athletes and musicians represent. More than a drink, it’s the way of life lived by athletes, sports, bands, believers and fans. See more about Monster Energy including all of its drinks at http://www.monsterenergy.com.