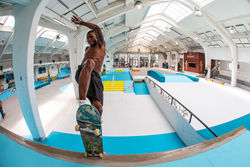 The Monster Energy skateboarding team hit Europe for this year’s edition of the CPH Open competition. For the first time in its storied history, the grassroots skate event was held at three stops: Copenhagen, Denmark; Amsterdam, The Netherlands; and Berlin, Germany. Over 150 top pro skateboarders from across the globe – including riders from Argentina, Chile, Denmark, France, Spain, Italy, Norway, and the United States – are on board for the unique skate tour.

Known as the “The Champagne of Skateboarding,” the CPH Open is an annual spectacle attracting the best skateboarders from across the globe since its inception in 2007. A real “skater’s contest” that no pro wants to miss, CPH Open has created a winning formula by mixing traditional stadium skateboard competitions – for instance at Copenhagen Skatepark – with cash-for-tricks sessions at authentic street locations across the city.

Presented by Monster Energy, this year’s three-city spectacle started on August 4 with a three-day stretch in Copenhagen, followed by an action-packed day in Amsterdam. Kicked off on August 9, the grand finale in Berlin included an international street skateboarding competition at the Nike SB Shelter skatepark in Berlin on August 11, next to surprise events across the German capital.

Going back to where it started, the CPH Open returned to its roots in the Danish capital where Wair already claimed first place in the street contest last year. Perhaps it’s something in the water in Copenhagen, but the city turns Wair into an all-out contest machine. At the Triangle concrete street spot, Wair landed backside heelflip to fakie and frontside bigspin fakie over the hip, 360 kickflip over the bump, frontside boardslide over the gap rail, crooked to nollie flip on the ledge, kickflip crooked fakie and backside tailslide on the extension to claim first place against some of the world’s best street skaters.

Wair also ruled the street session in Downtown Copenhagen with backside Smith grinds on the tall picnic table and cleared the cobblestone street gap with a switch heelflip. At the newly rebuilt Copenhagen skatepark, Wair floated huge frontside kickflips on the quarter pipe and also popped a lofty kickflip over a stacked palette of beer cans from a kicker in a closed-off city street in front of a massive crowd.

Speaking of crowds: At each of these stops around the skate-friendly Scandinavian city, the action drew hundreds of spectators in a festival atmosphere. A major highlight included the Independent Trucks 40-stair Rail Session in counter-culture hotbed Christiania. This is where Monster Energy’s Baekkel laid down the winning best trick of the day with a 40-stair frontside 5-0 grind down the burly rail. The epic session also saw Monster Energy teammate Dario Matarollo from Argentina land a frontside lipslide down the rail for third place.

The weekend also included a raging bowl session for the 20th anniversary of legendary ALIS Wonderland indoor park, where Baekkel found the right lines to drop hammers for a second place finish.

A real “skater’s skater,” Wair is known for attacking any type of terrain – from streets, to bowls, to skate parks – with effortless style. The winner of Thrasher magazine’s coveted Skater of the Year award (2013), Wair started his 2018 season on a strong note by dropping a critically acclaimed video part endorsing a new signature shoe for Nike SB. Although a back injury held him back in recent Street League Skateboarding and X Games competitions, the 26-year-old from Bordentown, New Jersey is officially back on track in Europe.