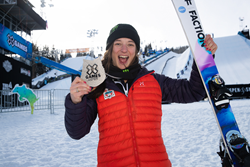 Today was really special. The course was big, but really fun, and I’m just excited I landed my run – Sarah Hoefflin

With bright blue skies and sprawling crowds, the scene was set for an epic final. Hoefflin threw down the first clean run of the day, which earned her a 90.00, but would have to settle for a silver medal after Kelly Sildaru scored a 99.00. Hoefflin is no stranger to hitting the podium after winning gold in Women’s Ski Big Air at X Games Aspen 2018, and put down an impressive run, which included a disaster switch 270 on and a front 440 off the cannon, in the rail section. Then on the jumps, she tossed a massive switch 1080 on the money booter, which had the judges and the crowd going wild.

“Today was really special,” said Hoefflin following the event. “The course was big, but really fun, and I’m just excited I landed today,” she continued.

The highly technical slope course kept skiers on their toes, as there was a barrage of falls through the finals. Despite a bobble on her first run, Maggie Voisin was able to put down a clean second run, which earned her 87.66 and a spot on the podium.

With third place secured, Voisin laid it all on the line on her third run, but was unable to land smoothly and had to settle for a bronze medal.

“I’m glad I was able to land one solid run,” said Voisin. “Everyone was skiing so great today and the conditions were awesome.”

ESPN, ESPN2 and ABC will televise a combined 15.5 hours of live X Games Aspen 2019 competition, which
will also be accessible via the ESPN app and WatchABC to viewers who receive their video subscription from an affiliated provider. In addition, all 15.5 hours of live content, plus exclusive competitions, musical
performances and X Games Extra shows will be streamed on the @XGames YouTube, Facebook and Twitter pages.

Visit http://www.monsterenergy.com for exclusive updates from X Games Aspen 2019 including photos, videos, and contest results as they happen.