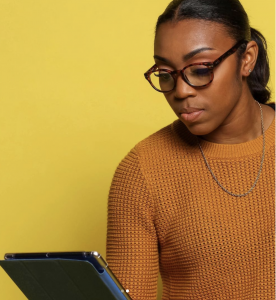 NEW YORK, NEW YORK, UNITED STATES, May 29, 2019 /EINPresswire.com/ — Scojo New York draws its inspiration for its glasses from New York City’s contemporary and confident style that can be seen throughout the city. A number of professional athletes have jumped at the opportunity to work with the trendy eyewear brand, rocking their stylish glasses and promoting them on social media. Scojo offers a wide variety of ophthalmological products, including sunglasses and reading glasses.

Women’s National Basketball Association (WNBA) star Renee Montgomery posted on Instagram, professing her fondness for Scojo’s glasses with blue light filtering that protect eyes from electronics. “Easy collab for me”, said Montgomery in her post. Track and Field star, Blair Henderson, praised the same glasses in his Instagram post, citing how they are important to him keeping up a healthy lifestyle.

“I spend about 10 hours per day looking at my phone screen, computer screen, and/or IPad,” Henderson wrote. “With the help of Scojo New York blue light glasses, I’m able to reduce blue light and maintain a healthy lifestyle.”

Former National Football League (NFL) wide receiver Nate Burleson donned a pair of Seraphin sunglasses, another line to the father company Ogi Eyewear, on May 17 through his IGTV post. Burleson played for the Seattle Seahawks, Minnesota Vikings, and Detroit Lions during his eleven-year career, and now co-hosts Good Morning Football on NFL Network. Burleson recounted his emotional experience after witnessing his son break his ankle in a basketball game. Throughout the video and storytelling, Burleson sported his pair of sunnies, another instance of Ogi Eyewear expanding its brand with professional athletes.

Scojo New York has been partnering with athletes through OpenSponsorship for several months. OpenSponsorship is a sports sponsorship marketplace connecting brands to athletes, teams and events for partnership opportunities. It is safe to say that Scojo will continue to be able to successfully grow its brand through collaborations with all different types of athletes on social media. It will be exciting to see how Scojo and OpenSponsorship grow together.

About Scojo
Scojo New York is a brand of Ogi Eyewear, an independent eyewear design company. By emphasizing innovation, originality, quality and value, Ogi Eyewear has refined its vision to earn worldwide recognition. Scojo is influenced by the modern style found in New York City. Learn more at scojo.com.

About OpenSponsorship
OpenSponsorship is a sports technology marketplace connecting brands to athletes, teams and sports events for sponsorship opportunities. The company backed by notable VCs in New York, San Francisco and Hong Kong and is headquartered in New York. The company mission is to make sports sponsorship more accessible, transparent and accountable. The company was named a finalist in the Sports Technology Awards, and the founder and CEO Ishveen Anand was included in the Forbes 30 under 30 sports list.