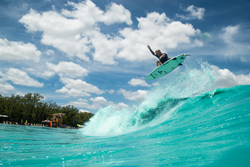 They say everything is bigger in Texas, and that now includes aerial maneuvers on surfboards. This coming weekend, the Monster Energy Surf Team is headed to Barefoot Ski Ranch (BSR) in Waco to catch major airs on the world’s largest air section in a man-made wave facility.

The inaugural Stab High invitational surf competition, supported by Monster Energy as the official drink sponsor in cooperation with Stab magazine will bring together twenty of surfing’s premier aerialists in a unique competition with $25,000 in prize money for first place. The invited riders were selected based on a combination of their aerial ability and ranking in the Stab magazine reader poll, an annual benchmark of the most culturally relevant surfers.

The unique competition will also feature a Highest Air event for $20,000 in prize money and the Vans Acid Drop, featuring aerial pioneer Nathan Fletcher leading surfers off the pool wall to plummet down to the waves below.

As the first competitive event of its kind, Stab High presented by Monster Energy invites elite surfers to showcase their biggest and most innovative airs in front of a live crowd in a festival atmosphere. All riders who have already experienced the BSR wavepool, managed and tested by pro surfer Cheyne Magnusson, are praising the superb man-made waves.

This Saturday, watch out for competing Monster Energy riders and air specialists battling to post the gnarliest airs and win the cash prize, including:

Spectators watching the live web stream will witness the field of 16 top aerialists battle through two rounds of Qualifiers for one of six final spots. The qualifying sessions will see riders alternately hitting left-turn and right-turn waves to showcase their versatile riding skills. The judges will score aerial moves on a 100-point scale based on height, speed, style, distance, creativity and clean landing. The weekend will also reward a Highest Air winner with a $20,000 prize.

For the inside scoop on the action as it unfolds, also look forward to Monster Energy athletes behind the microphone as commentators. Big Wave pioneer Shane Dorian, California surf icon Bobby Martinez and Olympic Gold medalist and snowboard innovator Sage Kotsenburg will be meeting fans and commentating throughout the event.

The day’s surf action will be supplemented by DJs and an after party with musical act Poolside, plus an after-after party featuring Reverberation Radio. Next to catering and drinks, on-site spectators will also have access to Barefoot Ski Ranch’s unique water slide and launch ramp features.

For all viewers unable to follow the action in Waco this Saturday, ABC will also broadcast a special episode of World of X Games with highlights from Stab High presented by Monster Energy on Oct 14, 2018 at 4 p.m. ET.