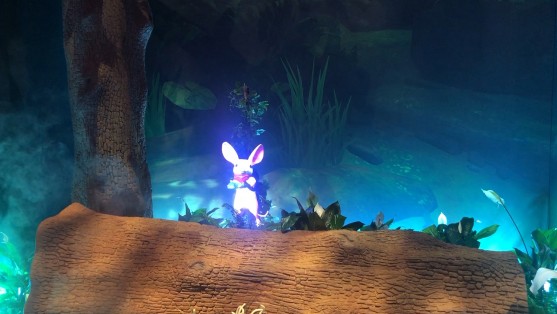 LOS ANGELES, June 14, 2019 – When people see something they have never seen before, like the “holographic” displays from TLC Creative seen at this year's E3, they stop, they look and they analyze what they are seeing. Often reaching for words to describe the effect, people say “hologram,” due to the powerfully unique vision of 3D visuals floating in mid-air. Hypervsn™ is not a hologram; it's a new technology LED unlike anything else.

At E3 2019, the gaming industry trade show in Los Angeles, exhibit technical support was provided by HypervsnUSA and Los Angeles-based special effects company TLC Creative, who created 3D animations and provided an array of floating video for the E3 trade show. HypervsnUSA is a primary provider of the new technology displays, and is a pioneer in creating multi-screen “holograms,” up to 10 feet wide.

The floating video displays at E3 became focal points of attention, as the “holographic” devices were integrated into dimensional sets, also featuring live special effects. A 3D mouse character dances and interacts with visitors, set in a fantasy forest scene, complete with fog effects, and a bright butterfly flies overhead.

Blended-matrix floating video walls create large “holographic” impressions using the new technology. For the Golden State Warriors season opener last year, a large, mobile display was built with nine screens, creating one “hologram.” The rig was built to move the hologram display on and off the basketball court, showing a floating video NBA ring created for the event.

Last year's E3 2018 included a matrix of floating video created for Spyro™ the Dragon. The first widescreen 'hologram' display was incorporated into a tall set and placed in a bright, daylight area in the convention center, and the floating video brightness was pronounced, grabbing attention in a large open area.

E3 is a showcase in the exhibit industry, attracting and motivating the high-technology interests of gamers. The exhibit booths are state-of-the-art, immersive experiences. The exhibit experience of Fortnight was a show-stopper. The variety of content and higher quality games continues to expand gaming itself. The stakes are high for growth, and Xbox and Nintendo, among others, all compete with unique and spectacular displays for the best possible impressions and experiences.​