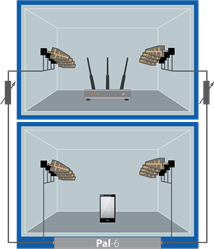 Prior to the smartBox, all the octoBox® instruments, including the Pal partner devices, had to be mounted outside the octoBox chambers, requiring extra cost and complexity to shield the instruments from interference and couple them into the chambers. With support for 8×8 MIMO (multiple input multiple output) and OFDMA (orthogonal frequency division multiple access), Wi-Fi 6 personal testbeds require more integration than legacy testbeds to keep their cost, size and weight practical and affordable.

In addition to reducing cost, the smartBox enables distributed monitoring and analysis and lets you easily interchange real devices and the Pal instruments for use as traffic partners. With the built-in Pal-6 instrument and 8×8 MIMO-OTA support, the smartBox enables an integrated dual-band sniffer or traffic generator local to each device in the testbed. The smartBox architecture greatly simplifies complex testbeds configured for testing Wi-Fi 6, OFDMA, mesh, roaming, Wi-Fi/BT coexistence, DFS (dynamic frequency selection) and other system level tests.

The smartBox can be coupled to other octoBox chambers via programmable attenuators or multipath emulators to emulate range, indoor multipath and motion.

Tim Higgins, Principal of SmallNetBuilder.com says: “The smartBox itself can be used as an instrumented 8×8 MIMO Wi-Fi 6 partner device. And since the smartBox can also enclose a real device, it offers us the flexibility to use either the instrument, Pal-6, or any real device as the partner for the throughput test. With the Pal-6 we get great configurability (e.g. bandwidth, # streams, MCS, etc.) and with a real device, we can demonstrate any issues with chipset or driver interoperability. Also, since the smartBox can act as a localized dual-band sniffer, the sniffer traces can be used to analyze roaming or band steering behavior of the station placed inside the smartBox.”

The smartBox’s integrated dual-band Pal-6 instrument is based on one of the most advanced Wi-Fi 6 chipsets on the market supporting all the Wi-Fi protocols, IEEE 802.11a/b/g/n/ac/ax. With the access to the chipset’s driver and firmware via the octoScope API, you can configure the smartBox’s built-in Pal-6 as a real device or as a test instrument. As a real device, the Pal-6 acts as a traffic partner running the standard station and AP (access point) drivers. As an instrument, it can emulate virtual stations for testing APs under heavy traffic load from multiple stations, act as multiple APs to a station under test, perform expert monitoring and analysis, replay captured traffic or operate as a sniffer.

Any of the radios in the smartBox’s Pal-6 can operate as sniffers and as octoScope’s synchroSniffer™ probes. The synchroSniffer aggregates captures from multiple Pal sniffer probes synchronized to the octoBox server using Precision Time Protocol (PTP, IEEE 1588v2). The packets captured by each Pal probe are streamed for viewing in real time while being merged into one PCAP file viewable by Wireshark and other common packet analyzers. Wi-Fi and Bluetooth packets are aggregated by the synchroSniffer into one merged PCAP file.

Wi-Fi 6 is based on the emerging IEEE 802.11ax standard that uses OFDMA to maximize the efficiency of Wi-Fi networks. OFDMA enables simultaneous communications of multiple stations (e.g. phones, PCs) with a single AP thereby multiplying the efficiency of the Wi-Fi channel.

“synchroSniffer capability is particularly helpful when testing OFDMA links with multiple stations operating on different resource units (RUs) because a single sniffer can only monitor a single RU. For an OFDMA link with 4 stations, you would need 4 sniffer probes, one on each station,” says Leigh Chinitz, Ph.D., octoScope’s CTO. “When placed inside a smartBox, each of the OFDMA stations can be monitored by a dedicated built-in Pal-6. The sniffer captures from each smartBox are then aggregated via the synchroSniffer software for powerful analysis of the entire complex OFDMA link,” Dr. Chinitz added.

About the octoBox personal wireless testbed

Stackable and configurable octoBox personal testbeds are completely isolated from external interference and can be used at an engineer’s office or lab bench.

Each octoBox testbed is controlled by a dedicated Node.js web server accessible via a browser UI for manual control or via REST API for test automation. The server controls the built-in instruments, traffic, test flow and DUT configuration and serves as the PTP and NTP time base for the testbed. Test results are saved in a Mongo.DB database, enabling multiple teams to easily collaborate by sharing test results and test automation scripts.

octoScope is the market leader in isolated, repeatable and automated wireless personal testbeds. Our patented technology redefines the accuracy, stability, economics and value of over-the-air wireless testing. The octoBox testbed is configurable for automated regression test sequences with a range of airlink conditions and interference scenarios. The octoBox testbeds are scalable to support a single DUT or multi-node mesh systems under test. The testbeds feature powerful technologies, such as test traffic generation, monitoring, motion emulation, interference generation and device emulation, essentially all the elements required to evaluate the behavior and performance of a broad range of wireless devices and systems.

See what our customers say about the octoBox.