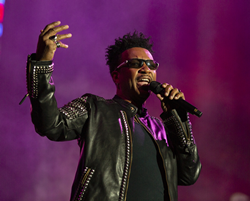 “We are so honored that our annual concert has become the can’t-miss centerpiece of the NAMM weekend, and this evening’s star-studded lineup did not disappoint,” said Chris Gero, vice president of Yamaha Entertainment Group.

Thousands of music dealers, industry officials and media representatives gathered on Friday evening to experience the second-annual “Yamaha All-Star Concert on the Grand,” the marquis music event held this week during the 2019 NAMM Show in Anaheim, California.

The concert opened with a powerful film that highlighted the company’s new far- reaching brand promise, “Make Waves.” Featuring a number of Yamaha artists, including James Newton Howard, Butch Walker, Lindsey Stirling, Bob James, Michael McDonald and many more, the film imagines a world without music, then contrasts that with a musical existence. It also highlights the impact music makes and the connective power it has in our lives, empowering the audience to make its own waves with music and in life.

Emphasizing the importance of music to the thousands of concertgoers, Yamaha Corporation President Tak Nakata said: “Yamaha feels that music is essential to a meaningful existence. You have the power to ‘Make Waves.’ This is your impact on the world, and it is our promise to the world that Yamaha will be there for you, through every step of your musical journey.”

“For the second year in a row, we brought our multi-artist live concert extravaganza to the NAMM Yamaha Grand Plaza Stage for all NAMM attendees to experience,” said Chris Gero, the four-time Emmy Award winning producer of the concert, and the founder and vice president of Yamaha Entertainment Group. “We are so honored that our annual concert has become the can’t-miss centerpiece of the NAMM weekend, and this evening’s star-studded lineup did not disappoint.”

Kicking off the night’s entertainment was Nashville-based singer and songwriter Jon McLaughlin, who captivated the audience with energized performances of “Beautiful Disaster,” “So Close” and “Why I’m Talking to You.”

Two-time Grammy nominated singer, songwriter and guitarist Jonathan Butler, known for his laid-back R&B, jazz fusion and worship music, had the audience mesmerized with “Cape Town,” “Lies,” “No Woman No Cry” and the Burt Bacharach/Hal David classic, “What the World Needs Now Is Love.”

Three-time Grammy award winning singer and songwriter, and Canadian Music Hall of Fame inductee Sarah McLachlan pleased her many fans with her emotional ballads “Building a Mystery,” “I Will Remember You,” “Sweet Surrender” and “Angel.”

James “J.T.” Taylor is the voice of some of the world’s biggest songs, a Songwriters Hall of Fame inductee, winner of five American Music Awards and a Grammy Award nominee, with 10 number-one hits and 18 top ten R&B and pop hits. He dazzled the crowd with the infectious rhythm of hits “Ladies Night,” “Too Hot”, “No Show,” “Joanna,” “Cherish,” and “All I Want Is Forever,” culminating in a convention-rocking, grand-finale performance of his classic hit, “Celebration.”

In addition to bringing some of the biggest names in music to the stage for the All-Star concert, Yamaha powered the entire plaza with the company’s award-winning commercial audio gear, including the Rivage PM10 Digital Mixing System and NEXO line array speakers.

For more information about the Yamaha Entertainment Group, visit http://www.yamahaentertainmentgroup.com